We had been hoping for a swarm to repopulate our now repaired top bar hive but it was getting too late in the season to find one that would be strong enough for the coming winter. So, we managed to buy a top bar hive that a fellow beekeeper had started as a nuc (short for nucleus) but it had grown far too big and strong.

Although her bars were slightly longer, the main issue was that the shape was different and it would involve cutting the comb to fit into our top bar hive. We planned and prepared in advance, knowing it would be messy and there would be some losses. 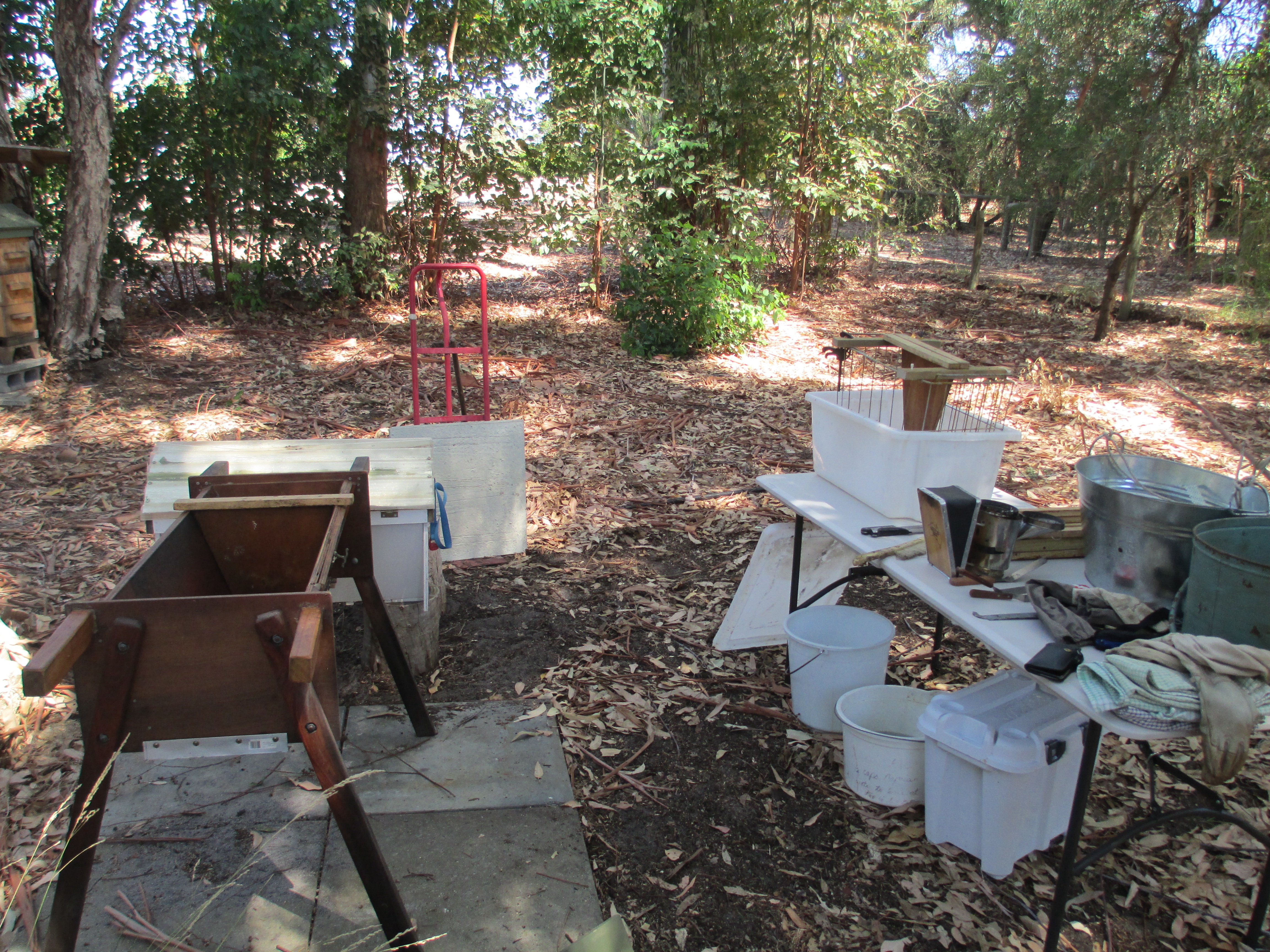 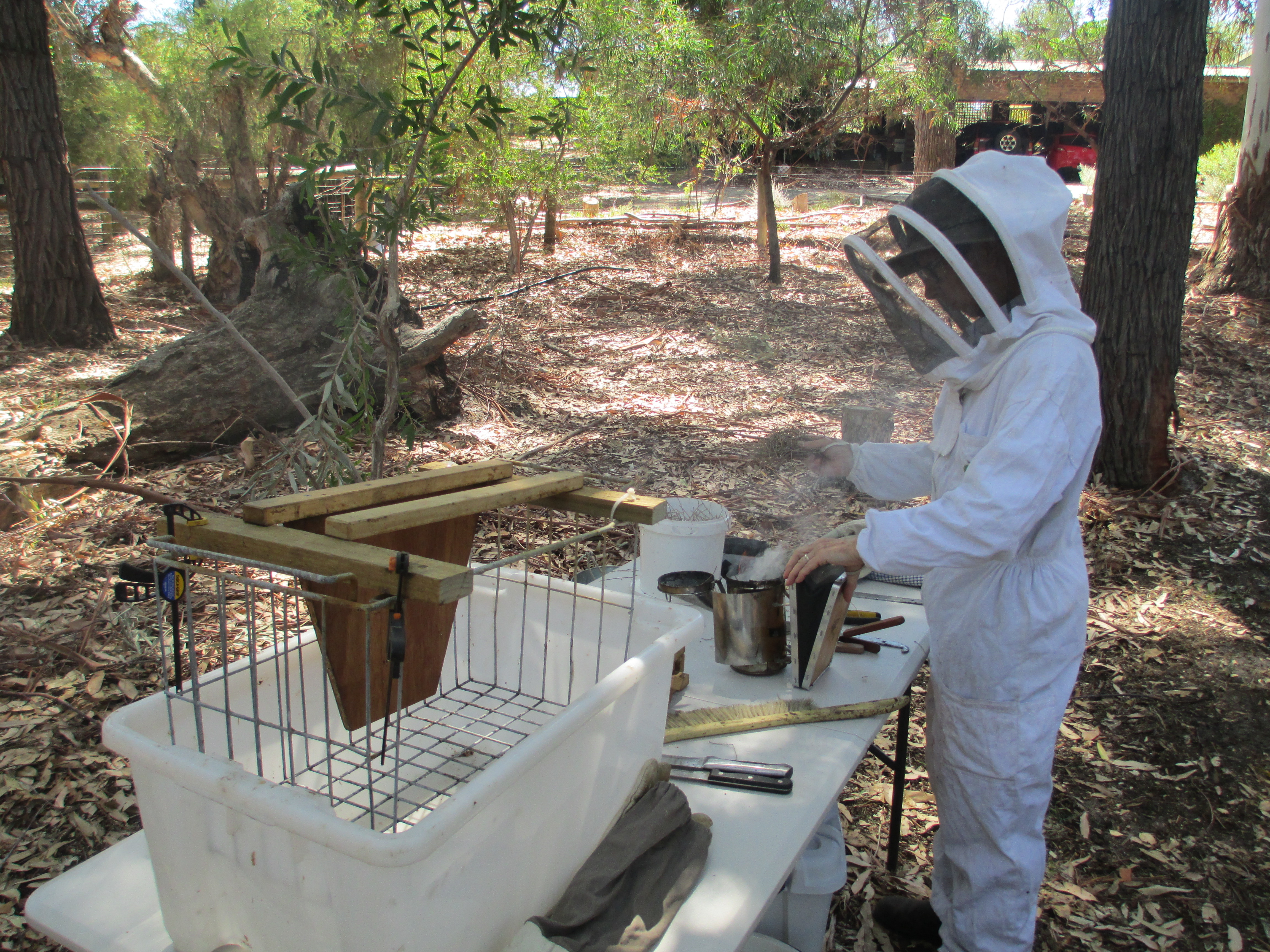 Suited up, table cleared of all but the tools, and ready to go

As expected, it was a messy job with lots of bee losses from the flowing honey, but overall we were happy with the result. We used the follower board from our top bar hive as the template to cut the comb on the bought top bars to the same size. This proved to be more complicated than we thought because long thin dowels had been inserted into the bars, and these needed to be cut off as well as the comb cut. 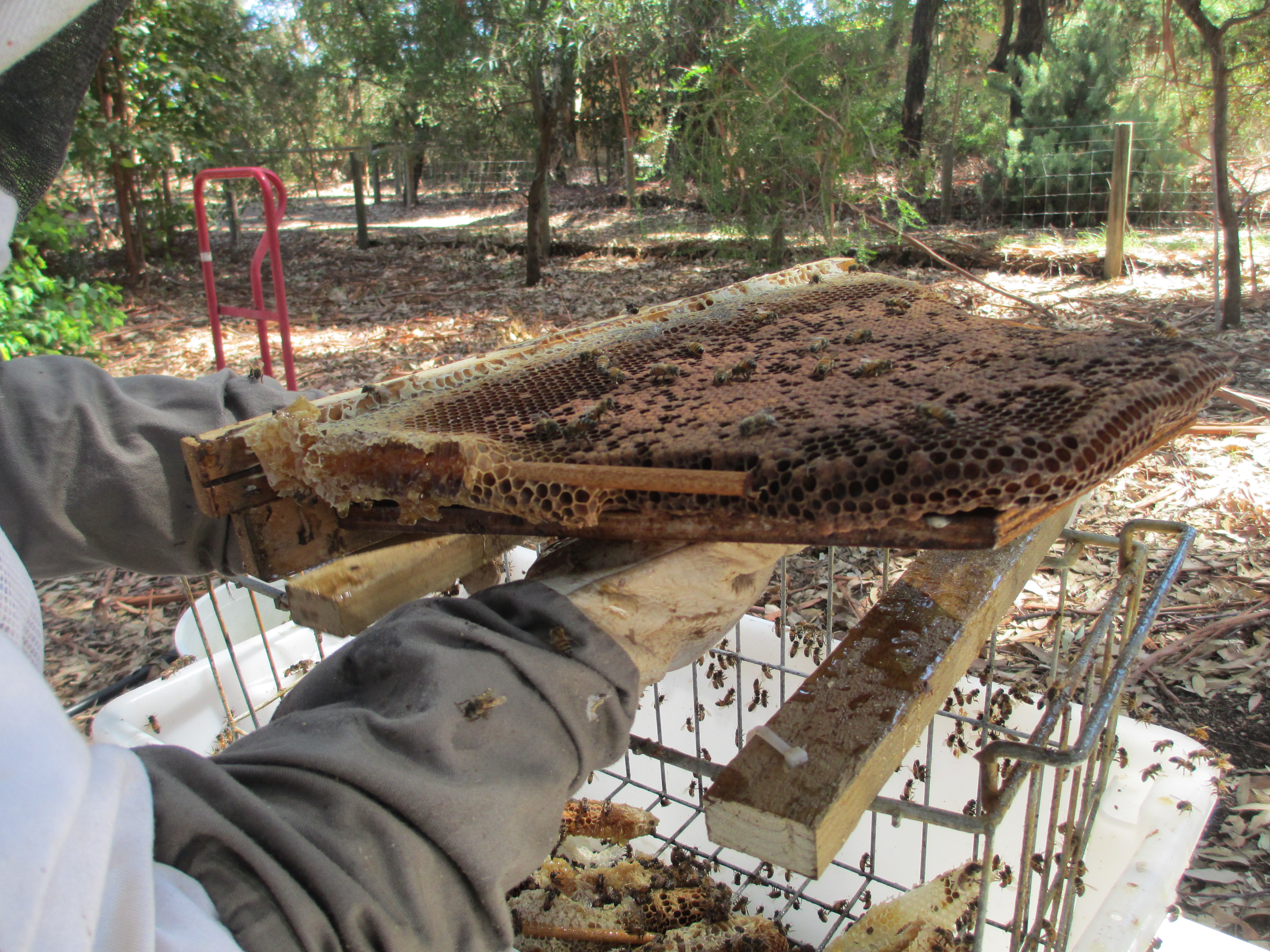 Dowels each side of the bar

Where we had originally thought we would hang the bar and cut vertically, the dowel proved too difficult and we lost a fair bit of comb this way, so they we used the follower board as a horizontal support as well as the template and had much more success. After brushing or smoking off as many bees as we could, the bar of comb was laid onto the follower board and trimmed to size. 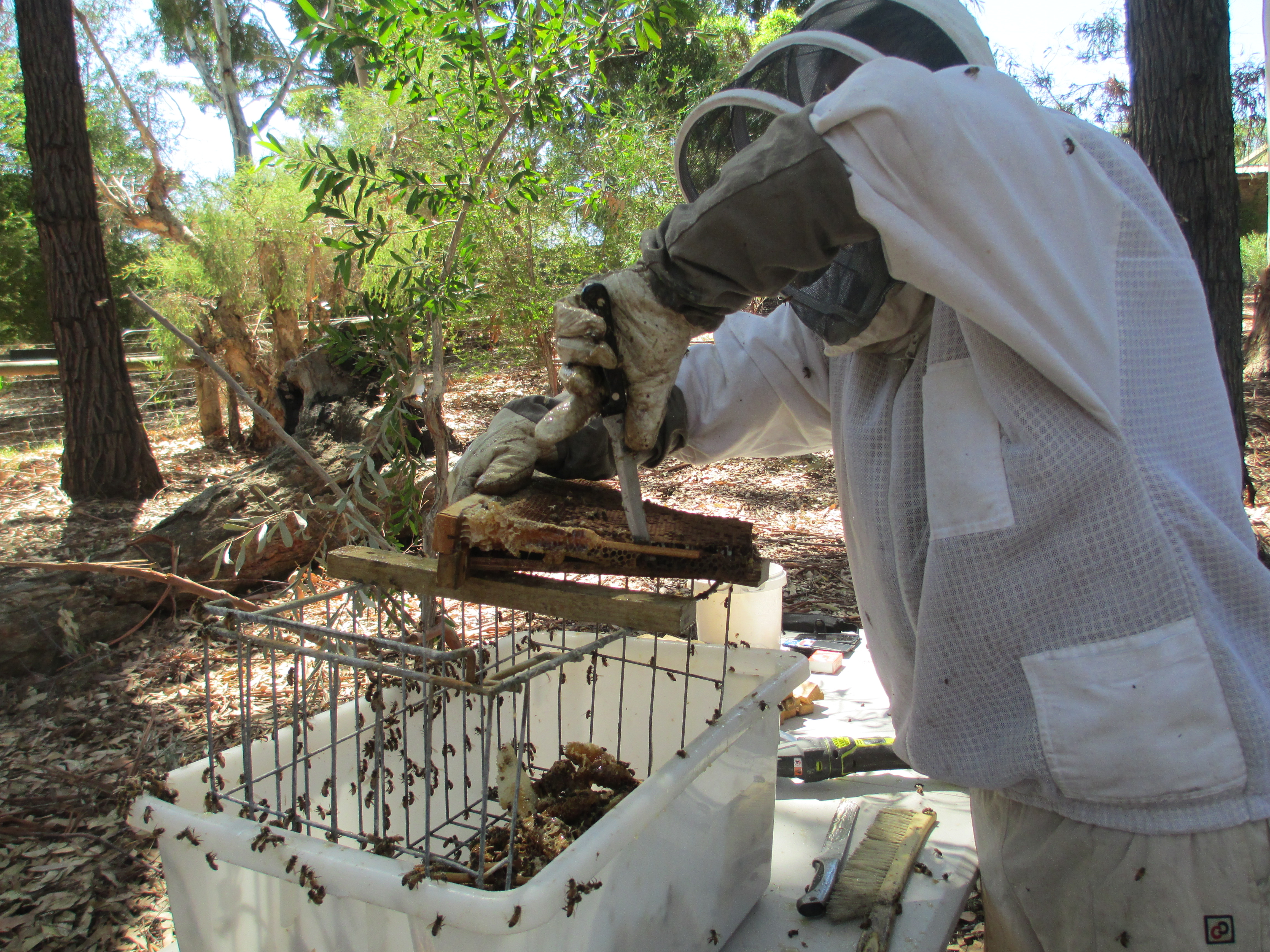 Cutting the comb to the size of our follower board

The cut offs dropped into the basket and honey oozed down into the tub, which gave more bees the chance to get away rather than being trapped in the wax/honey mess.

After trimming the comb to size, we used a Ryobi multi tool to cut off the dowel, which proved to be the smoothes and quickest way. The bar of comb was then placed into our top bar hive. 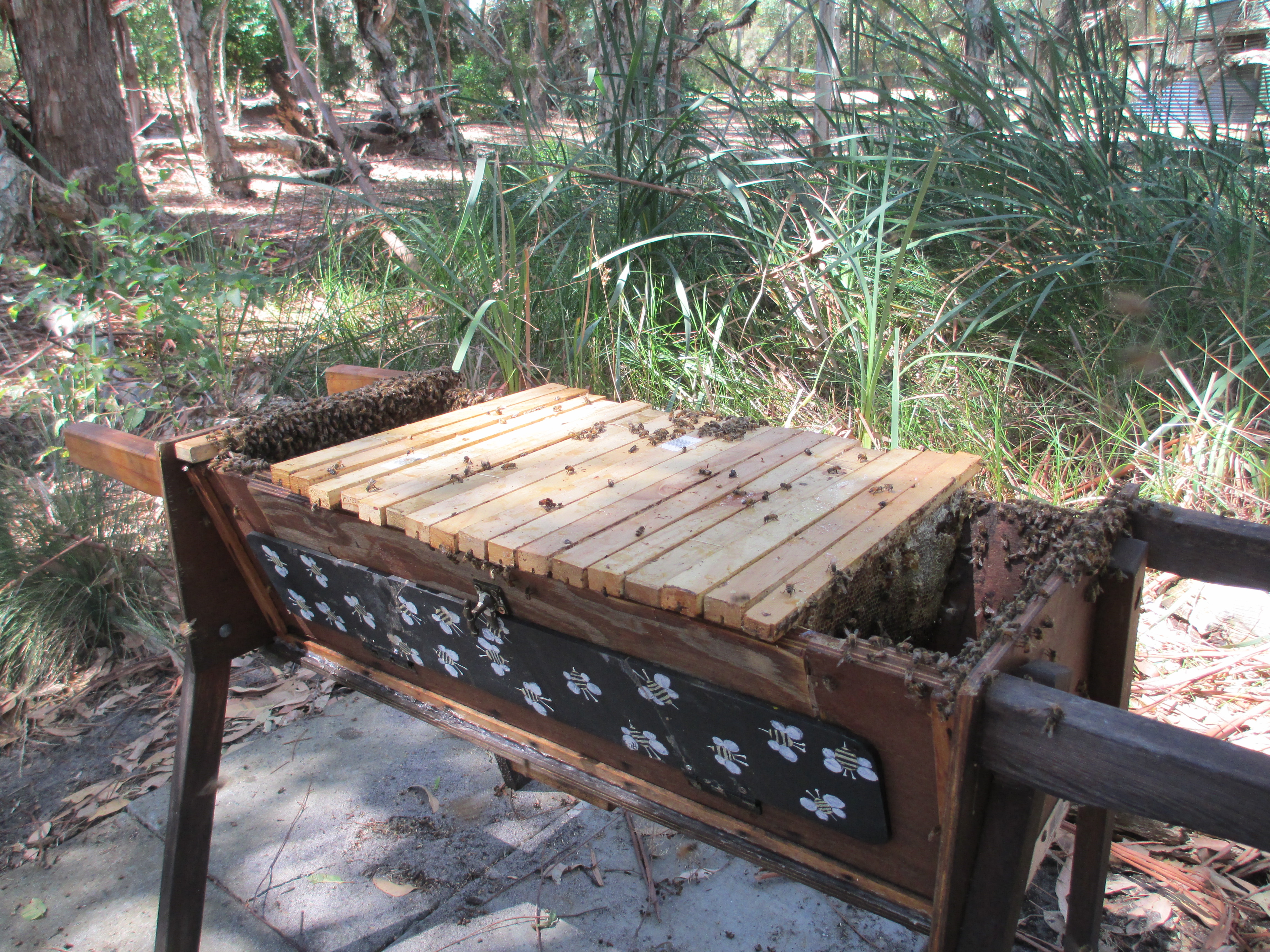 Most of the bars in situ

There were bees everywhere- in our top bar, all over the cut off comb, and all inside the bought top bar. 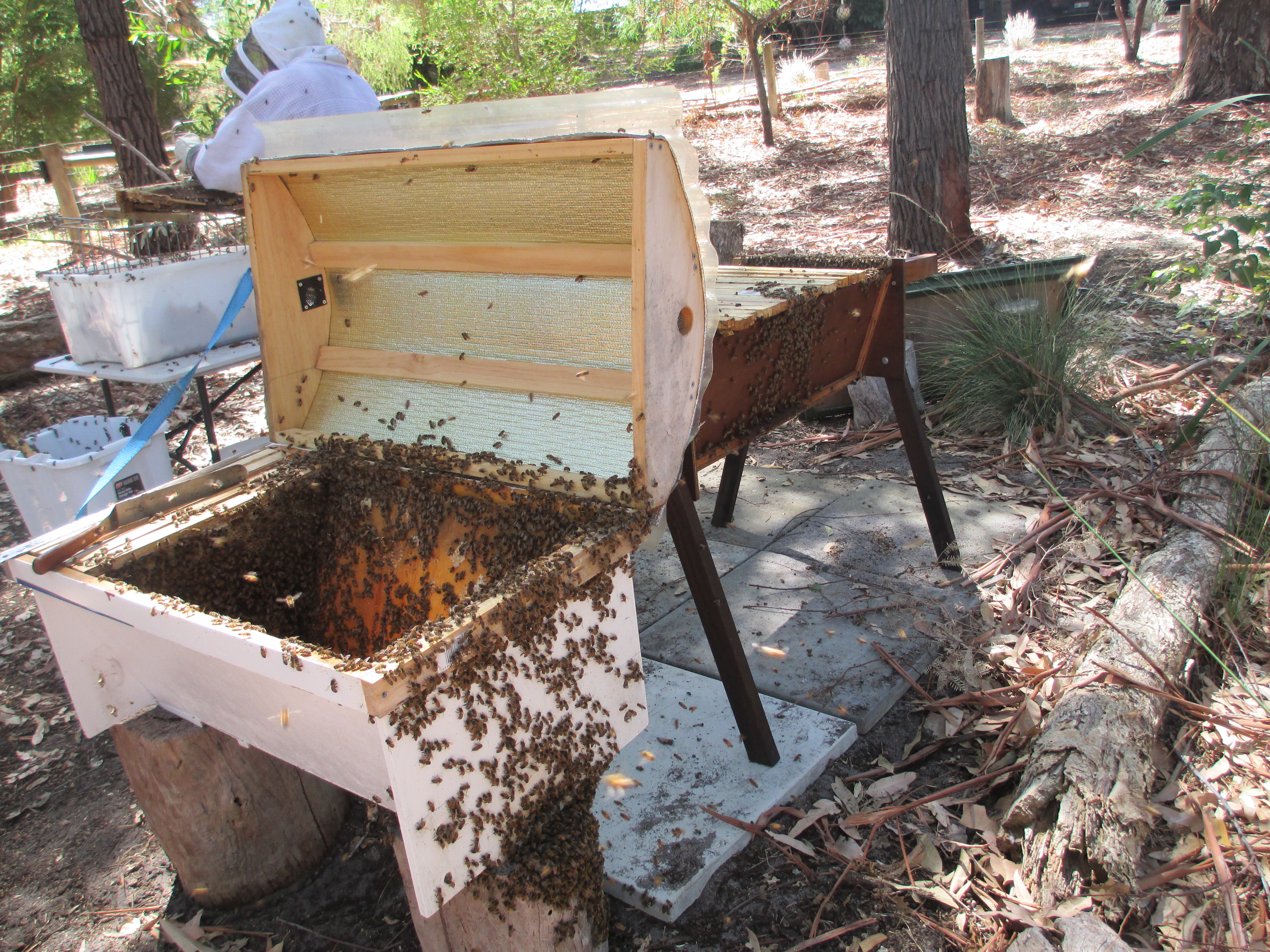 We were fortunate enough to see the queen, and made sure she was safely transferred to our top bar. When the job was complete, we packed away all the tools but decided to leave the tubs of comb cut offs which were completely covered in bees in the hope that most would make their way into the hive at dark.

The next morning, the tubs were removed, and there was some coming and going from the hive entrance, and lots of orienting bees. Fingers crossed it is a successful transfer!

It is great to have the top bar back again, to add to the Langstroth and Warre in the same area. Soon our horizontal hive will be completed and our other Langstroth will be transferred to it. this should be a much smoother transfer as the frames are interchangeable!