We are 'professional peasants' living on a small farm just outside Perth, Western Australia, growing veggies, ducks, chooks, turkeys, rabbits, sheep (Wiltipolls), guinea fowl, bees and even fish ('barra' in summer and trout in winter) in the swimming pool! We combine our day jobs with making the place work in as sustainable a fashion as possible.

One tree we are not able to take with us to McCarthy Park ll, and will really miss, is this orange tree!

It has given us an almost endless supply of oranges, usually twice each year. Over the years we have given away kilos and kilos, made chutney, dried them, juiced them, preserved them…. and the all time favourite- orange brandy liqueur! Today we made 20 bottles, enough to give as Christmas presents! There are still plenty of oranges on the tree for another batch!

Time for a change….. and not something we expected to be doing after living at McCarthy Park for 30 years……… but…… we are moving to McCarthy Park II near the end of the year. Things have and are continuing to change a lot in our area, so we have decided to move.

When looking at what we wanted, we decided to ‘downsize’ from 10 acres to 5 acres, which still gives us plenty of room to keep the animals and grow the fruit and vegetables we want. It is exciting but somewhat daunting- after such a long time we have accumulated a lot, only some of which we will need!

The property we have found is perfect, with all the space we need, but not many fruit trees…… so we are relocating the orchard! We found Paul, a specialist tree locator and he has begun a month long process. The first stage is pruning the branches and digging around the roots.

Now we wait for up to a month for the trees to settle, before Paul and his crew return to move the trees down to our new property. It is a massive job, but we get so much delicious fruit from our 45 fruit trees we didn’t want to start all over again!

Well, what a year 2020 is! We are so lucky in Western Australia and so far are doing ok, but evidence around the world reminds us not to be complacent. Living on acreage is certainly useful for isolation, and for a level of sustainability. The orchard has been pruned and there is lots of new growth and flowers, the sheep have had lambs, the bees have managed the winter well and are cranking up, the paddocks have been sown and are growing well in the unusually mild winter we have had, and the citrus have continued to produce an abundance of fruit!

After some time to renew and refresh the website…..we are back!

It has been a busy few months, with lots growing and happening, and is best said in pictures to get us back on track!

We were honoured to have a pair of butcher birds raise a family in front of the house!

Spring has sprung with chilly mornings and the days warming up. We have had two lambs, the turkeys have been laying for the last week, and the first goose egg yesterday….the ducks won’t be far behind!  It has taken a long time to build up a nice flock of Australorps again after the last fox attack, but we now have a lovely group of girls who are laying beautifully, and Louie the Bluey who looks after them just as he should. 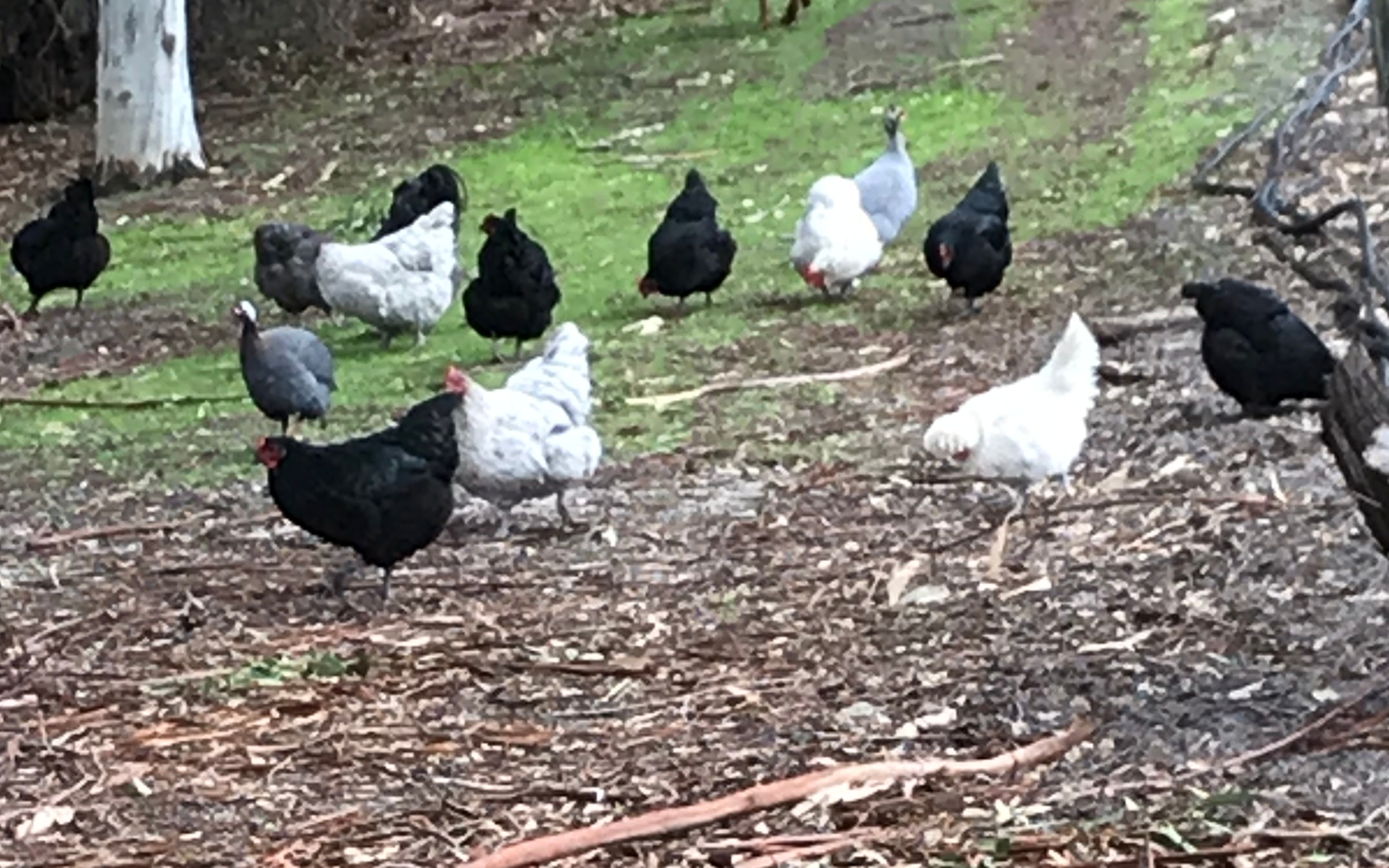 nice flock of Australorps-black, blue and splash (with a couple of guinea fowl hanging around!) 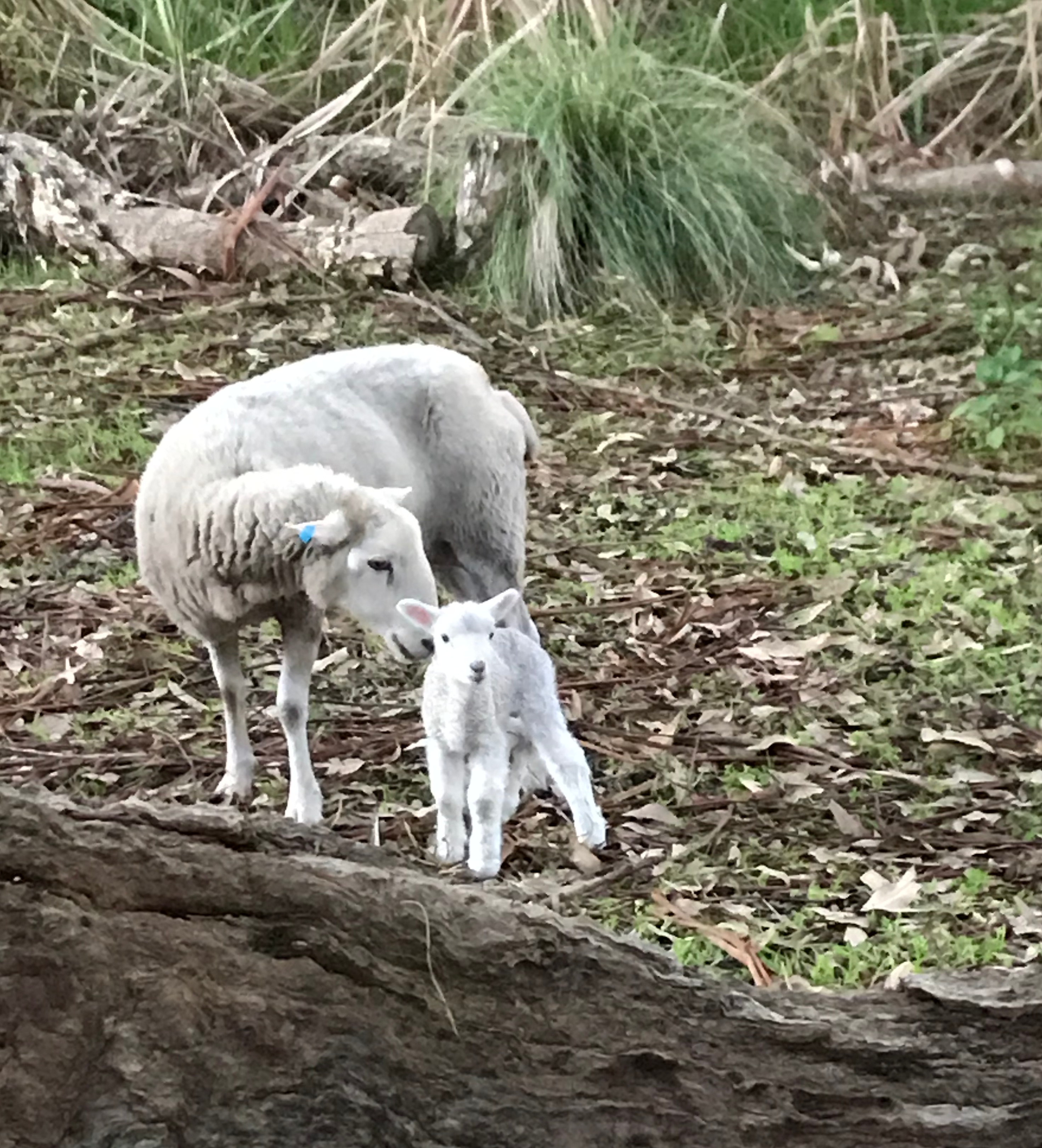 Despite the damp weather over winter, the bees have been active and held their own, and now look busier with the sunny days. 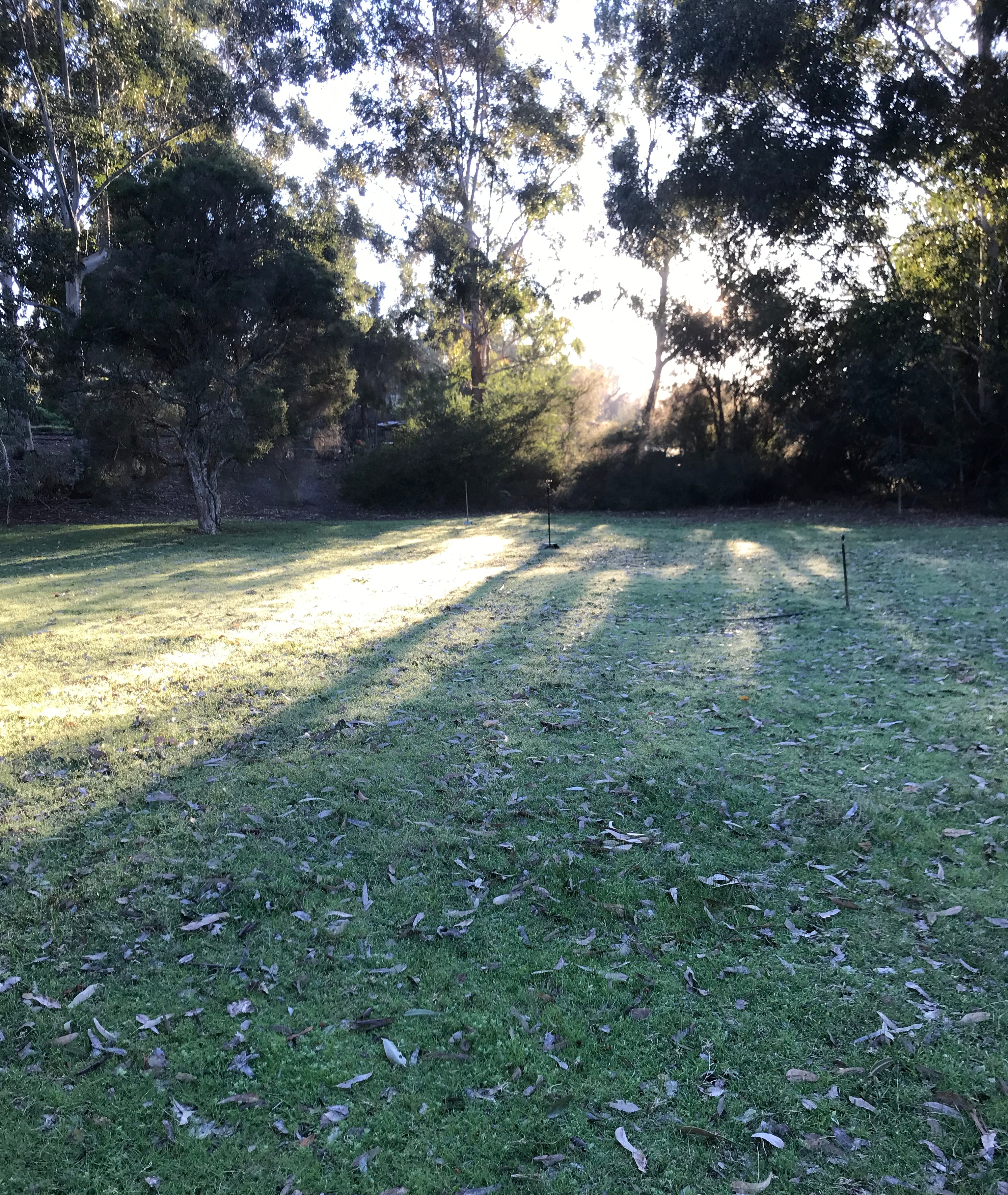 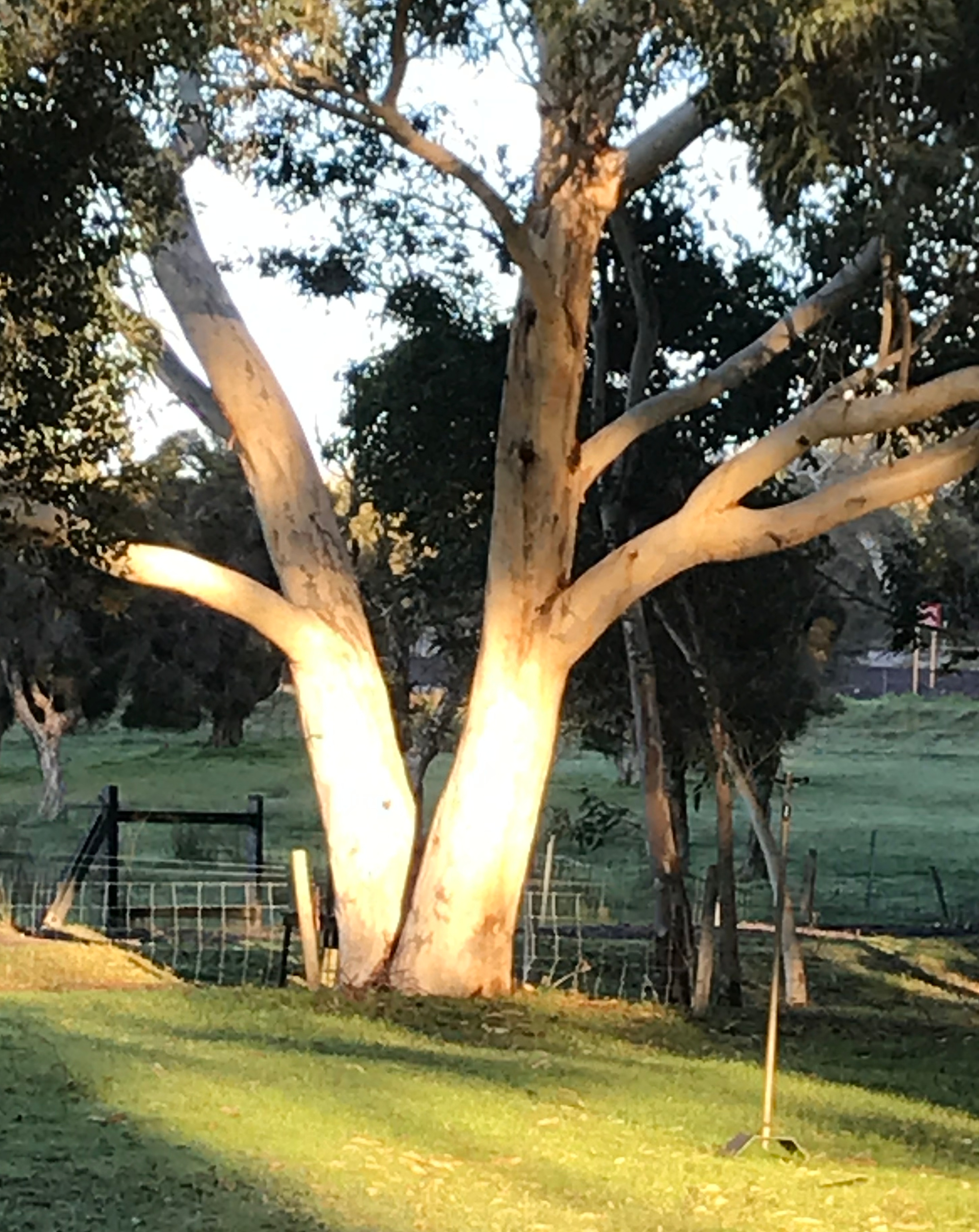 The orchard is now pruned and fertilised, and looks like being a bumper season. Apart from the citrus, the nectarines and peaches are looking very healthy with lots of flower buds. The loquat is bursting……… 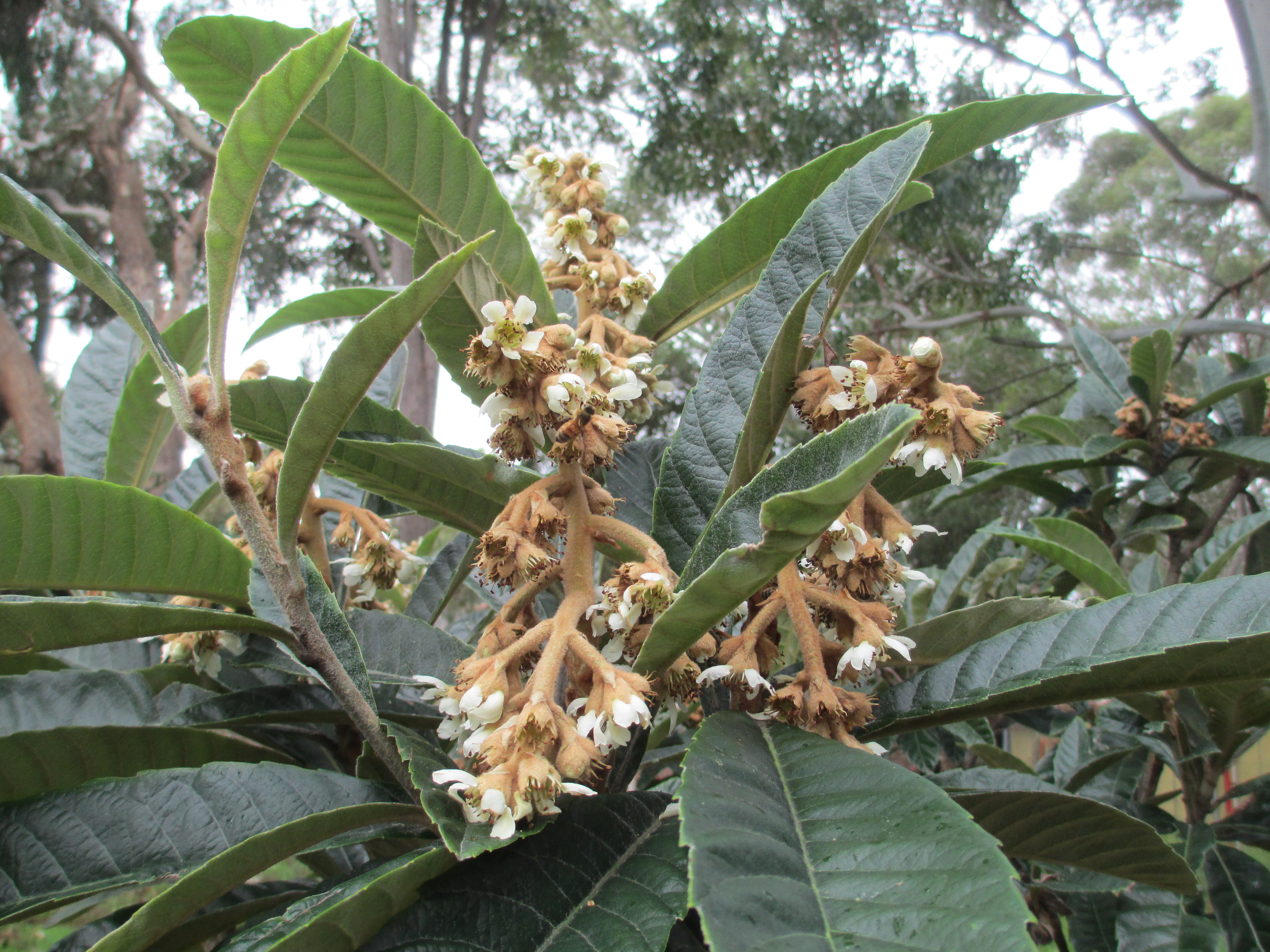 …….and the ice-cream beans are ripening…. 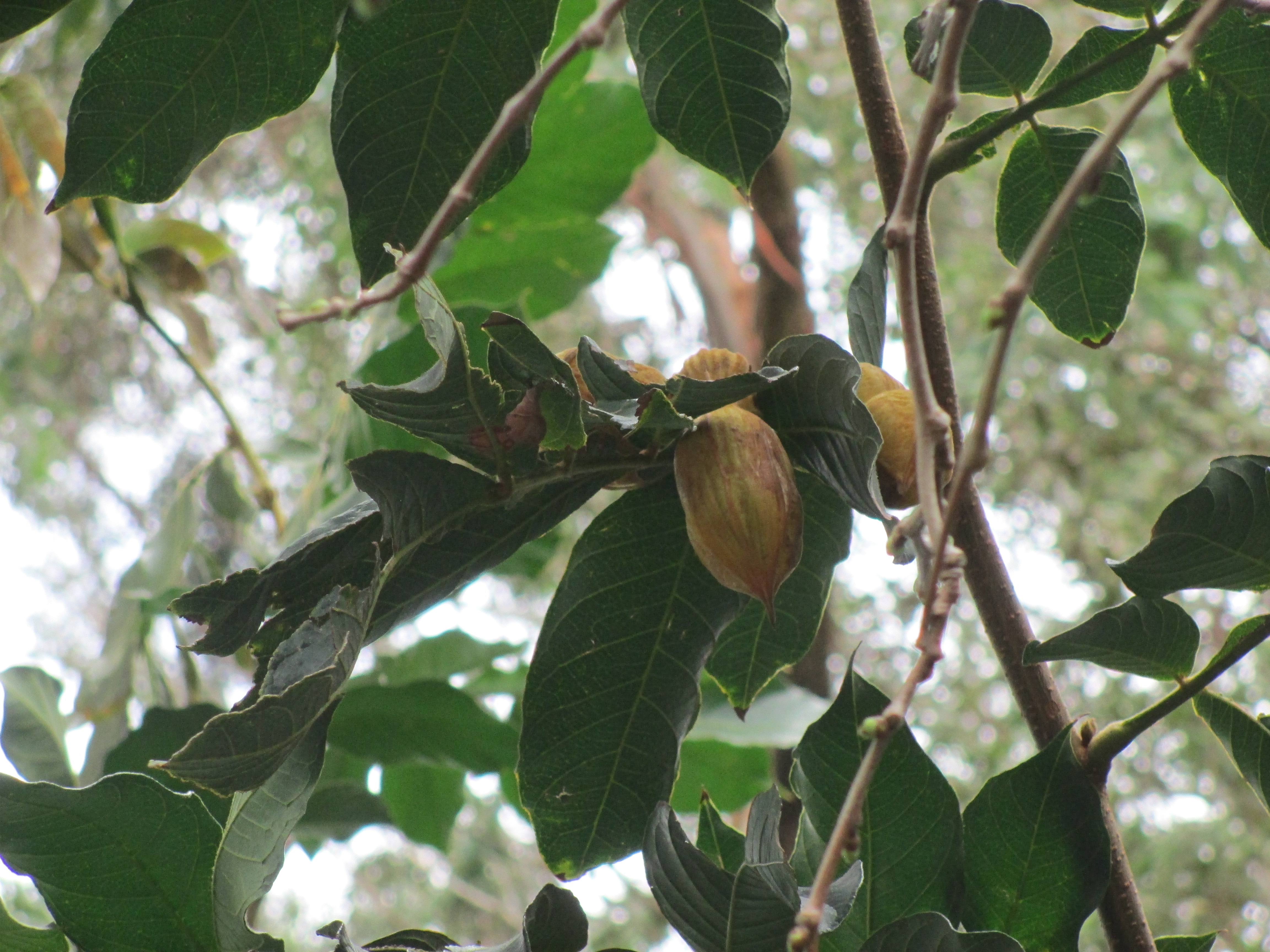 Fingers crossed for a great fruit season this year!

Our orchard is growing and producing! At the moment the citrus are just ripening, and look fabulous. It was great to plant different varieties that fruit at different times of the year. One mandarin tree has finished and the next is almost ready. Just love the bright orange of the mandarins and oranges, they look so fresh. 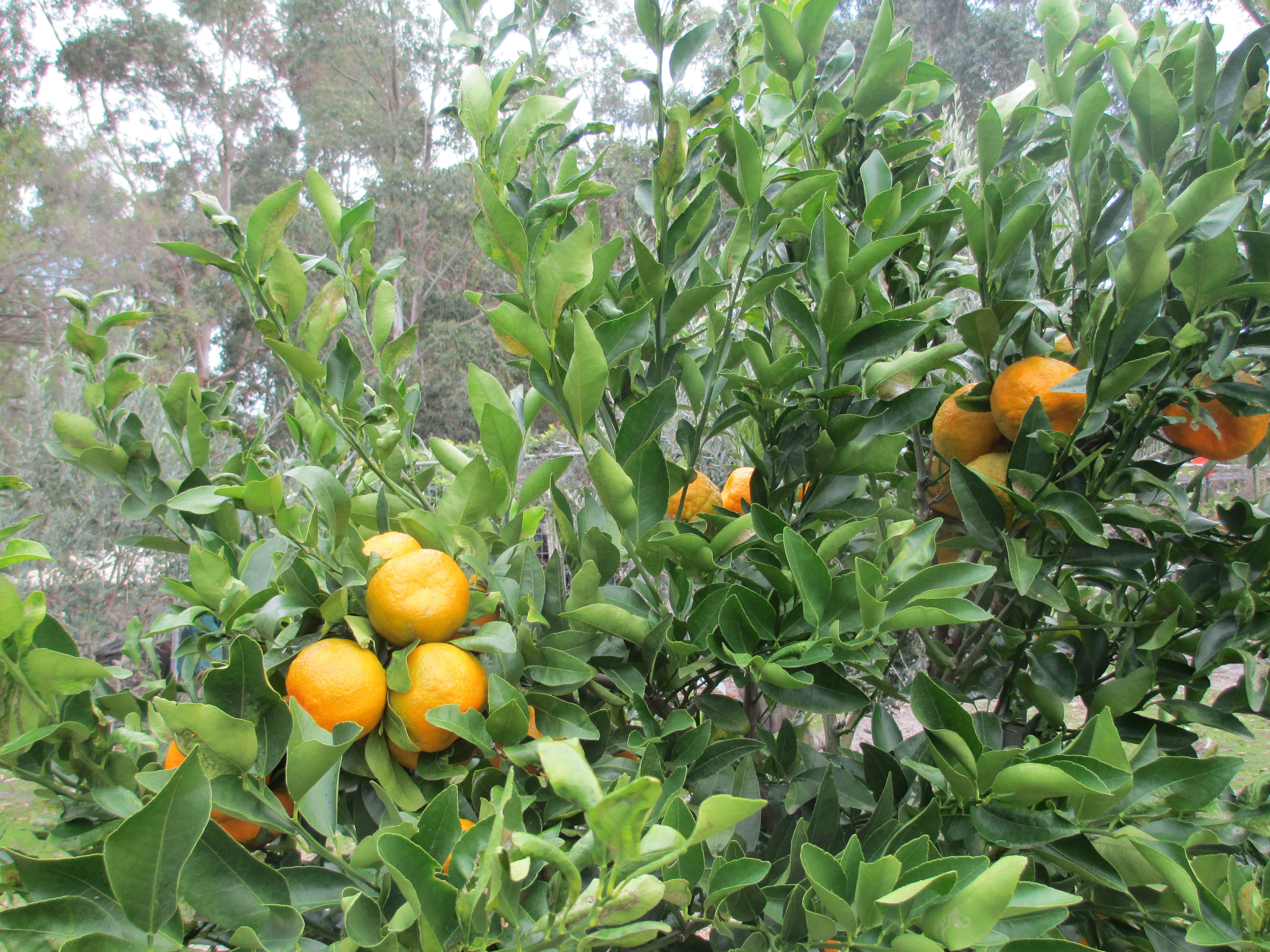 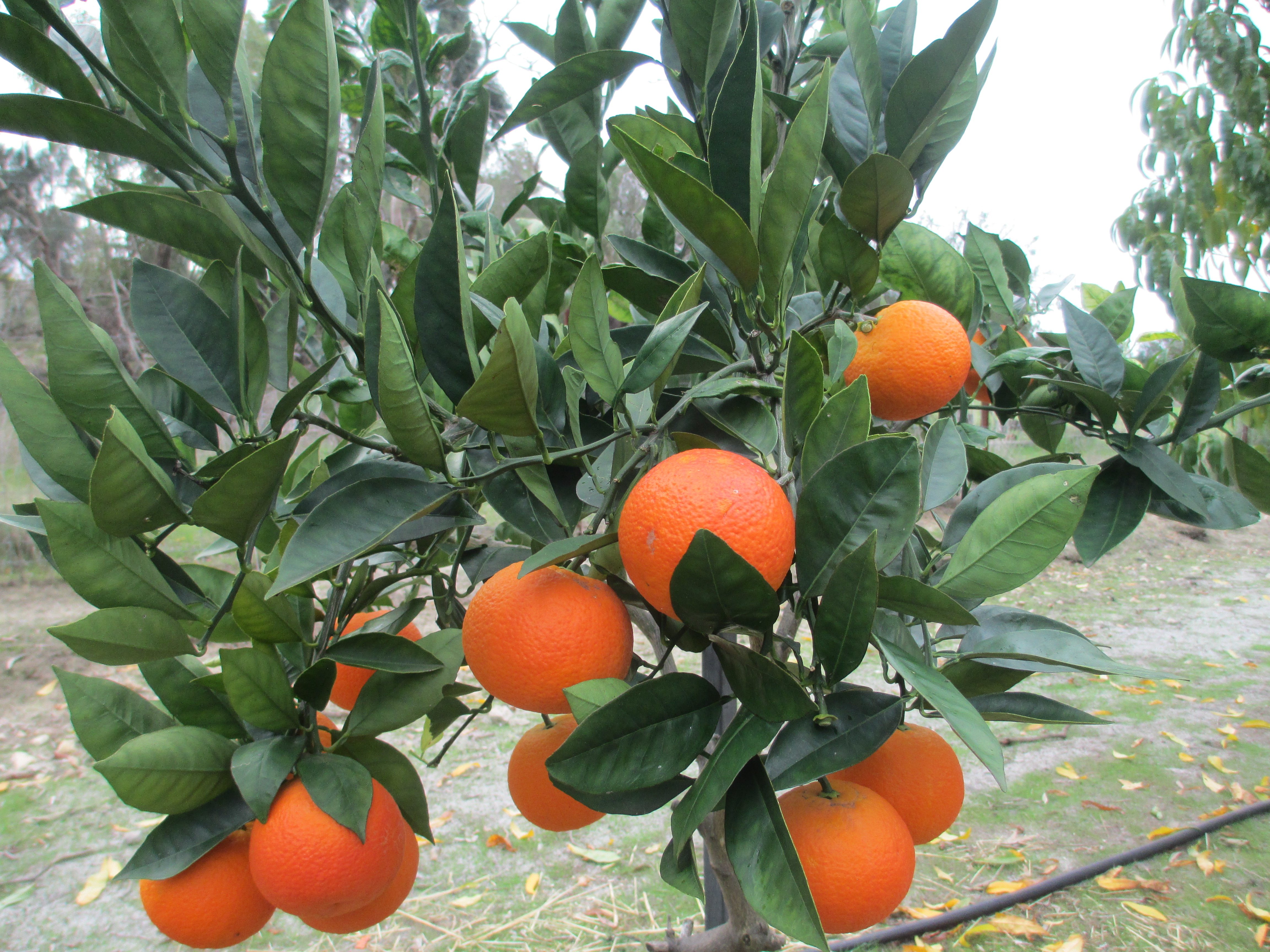 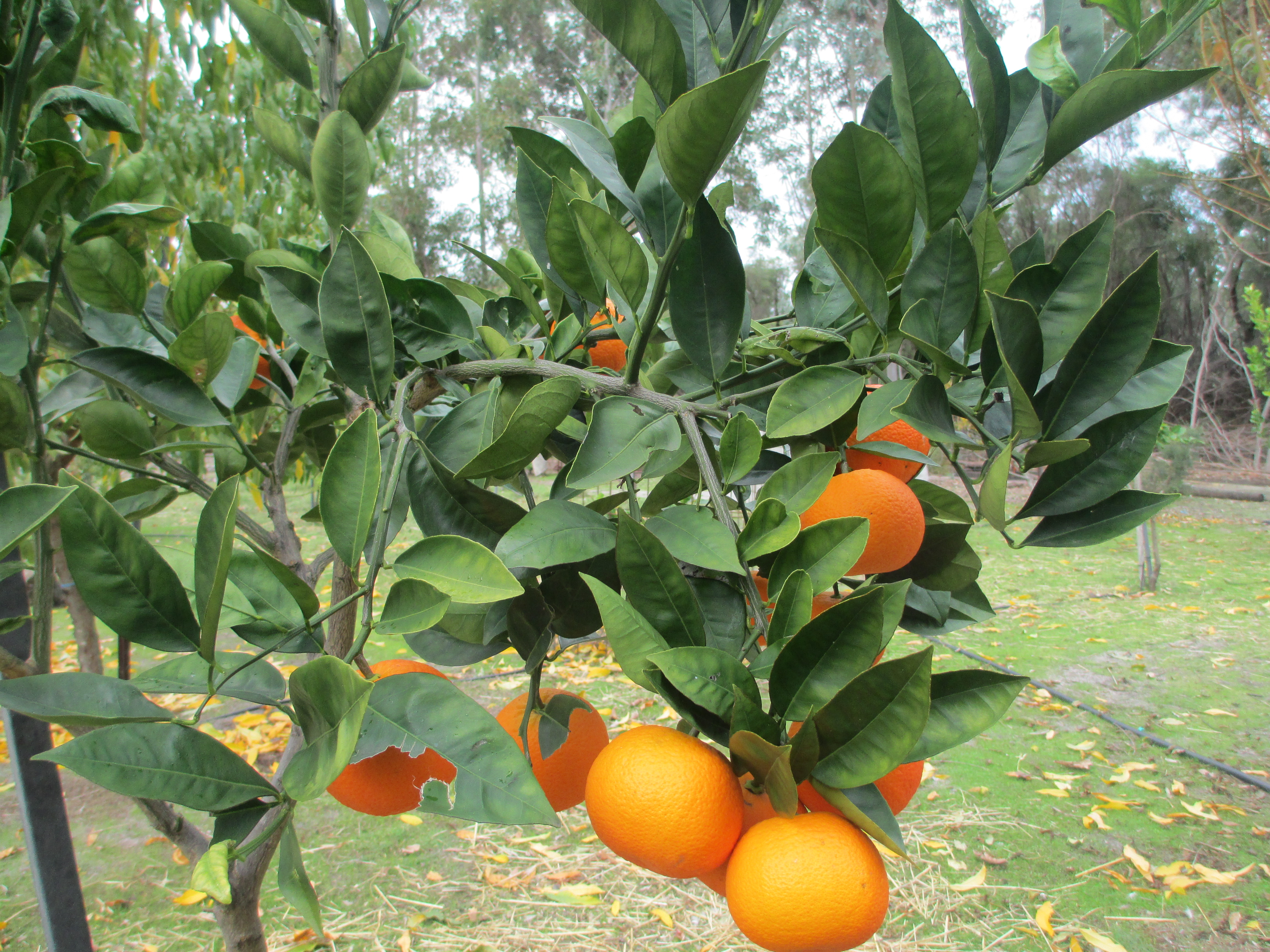 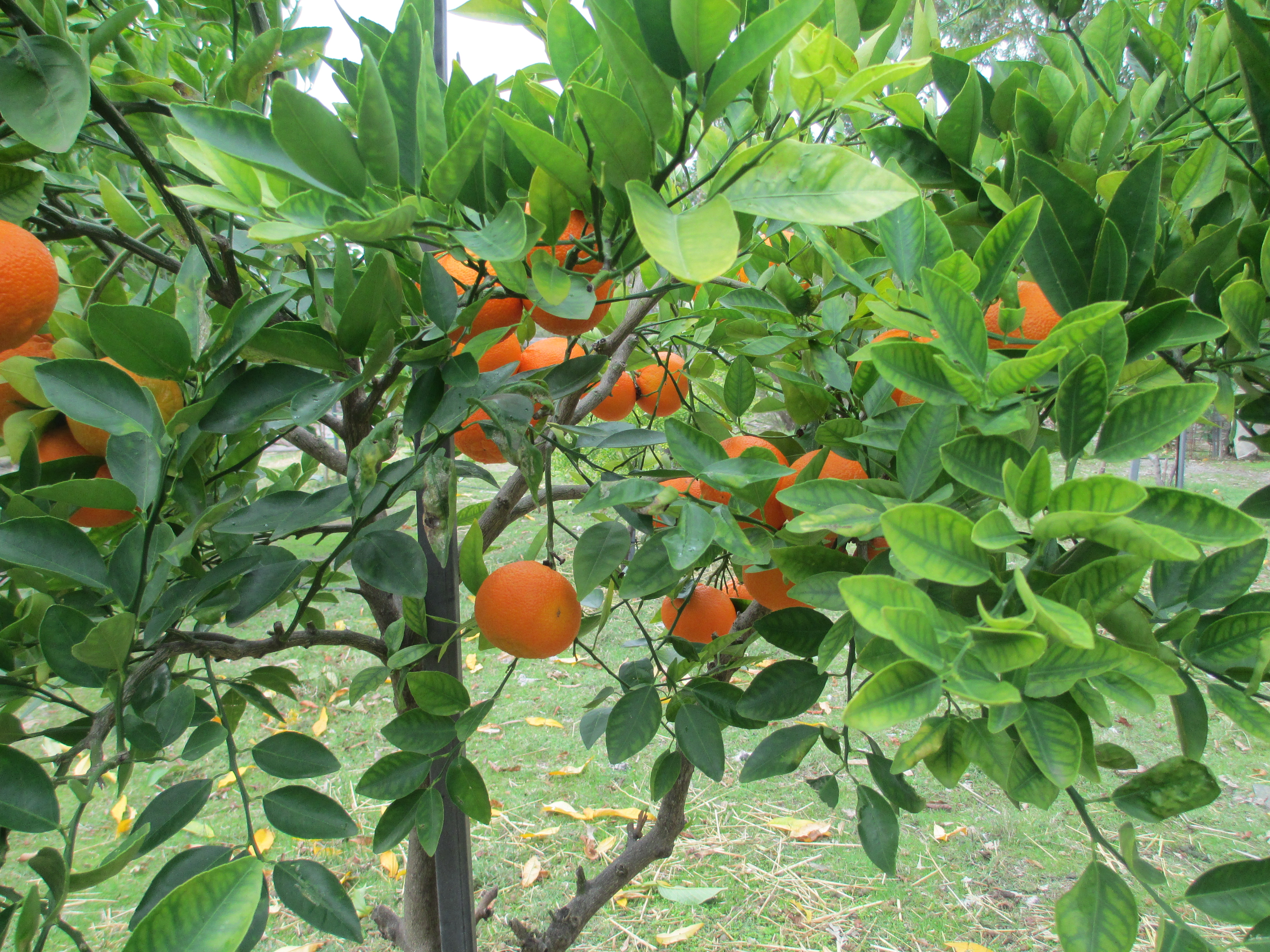 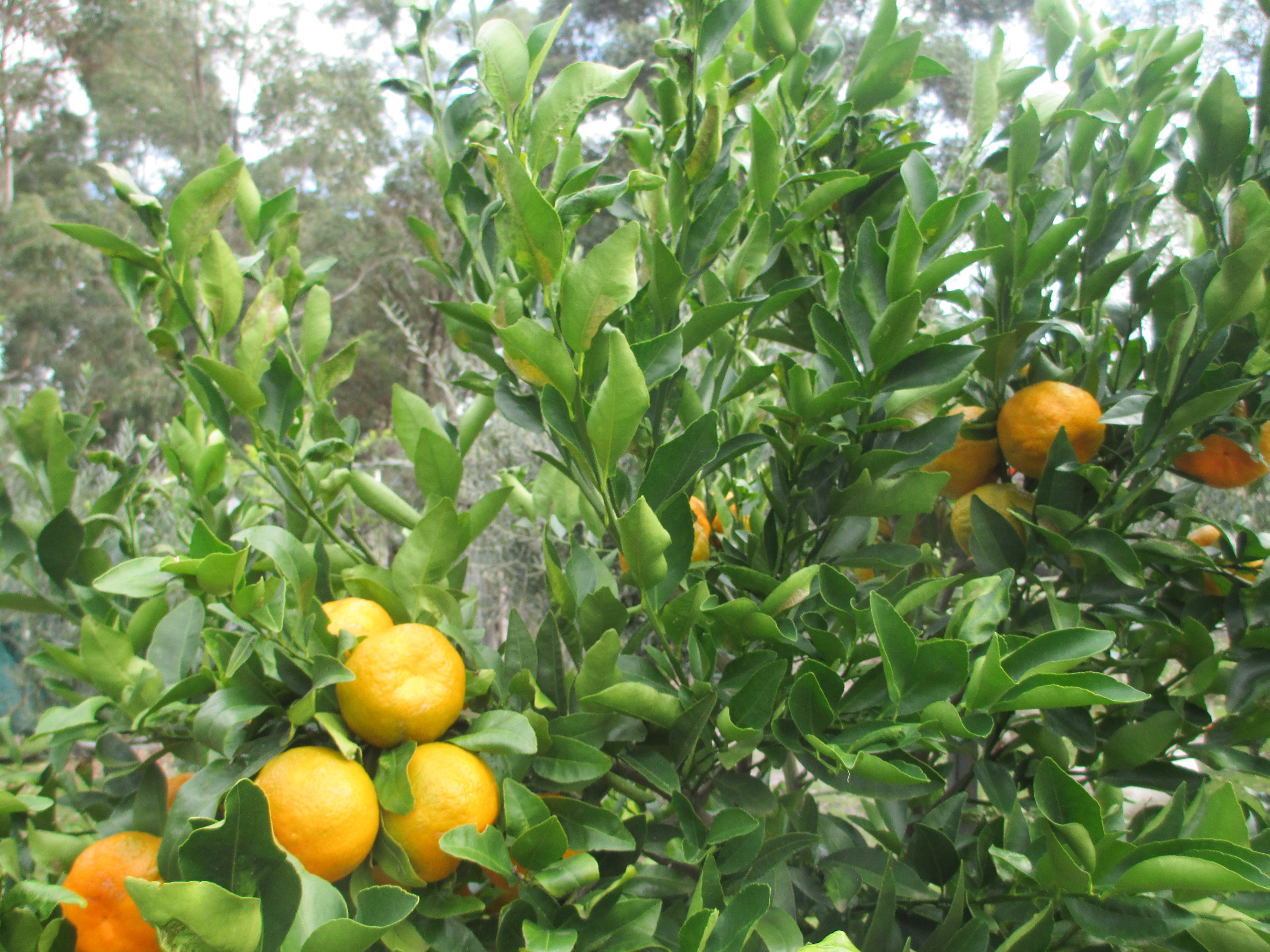 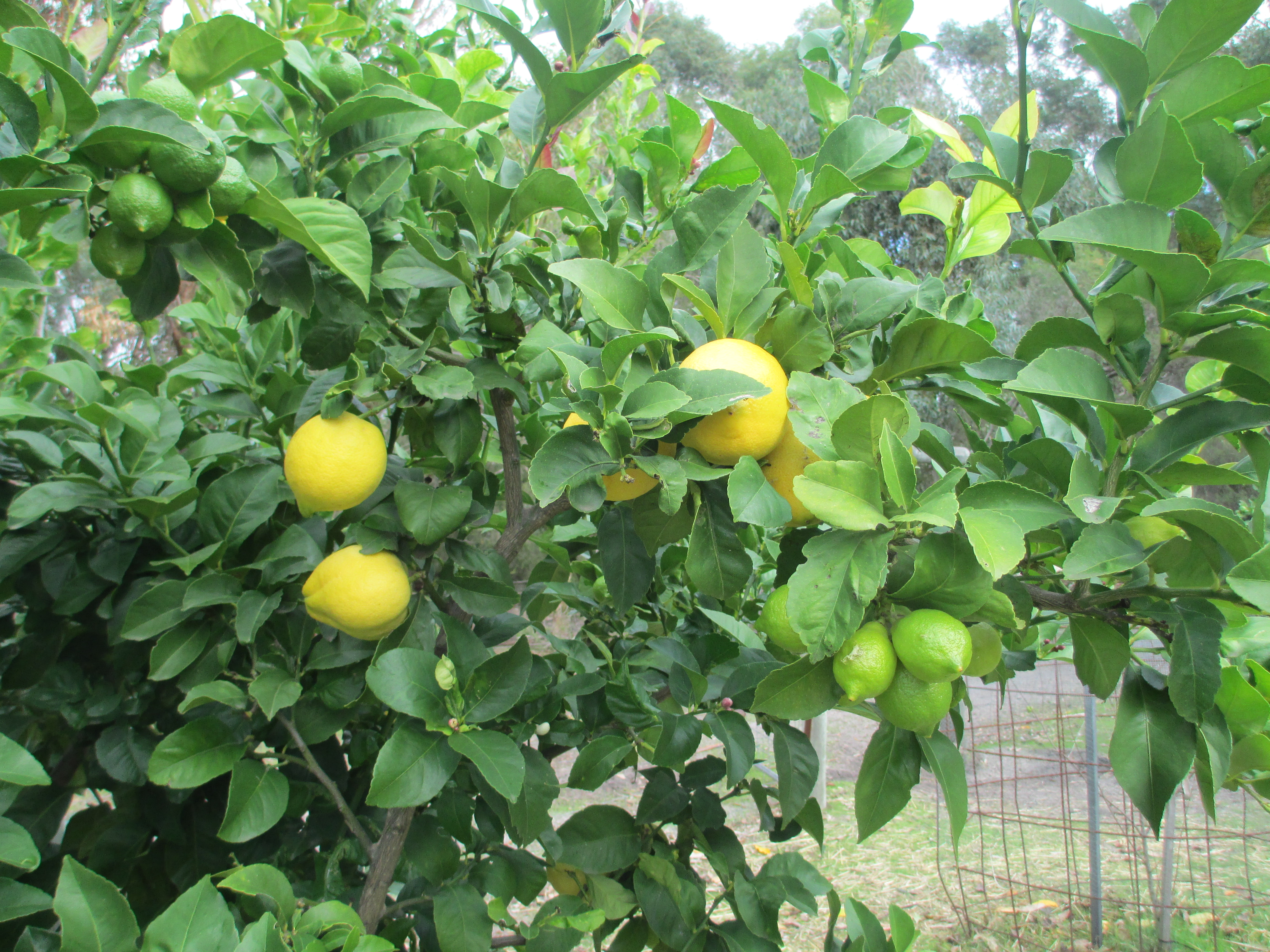 The lemon tree is also producing well, which is very timely as we have almost run out of frozen lemon wedges! And the main orange tree near the house also has an abundant crop again.

This season has been one of the worst honey seasons for years apparently, all across Australia. We seem to have been quite fortunate that we haven’t had to feed our bees over summer, unlike some of the beekeepers in other areas.

It hasn’t been great for us either, with no honey harvest this season (apart from excess frames when we transferred from the Langstroth (in the billabong) to a Horizontal in December 2018. The bees have been able to build comb and fill cells with honey- hopefully providing enough for the hive to  manage over winter.

Both of the Horizontal hives have been reduced down to one side, making it easier for the bees to keep warm over winter. There are still a few WSP frames that were kept in the transfer from Langstroth to Horizontal, and several of these frames have comb built below the frame. We had hoped to be able to harvest these and replace them with full depths over summer, but it has been such a poor season we have had to leave them as supplies for the bees. 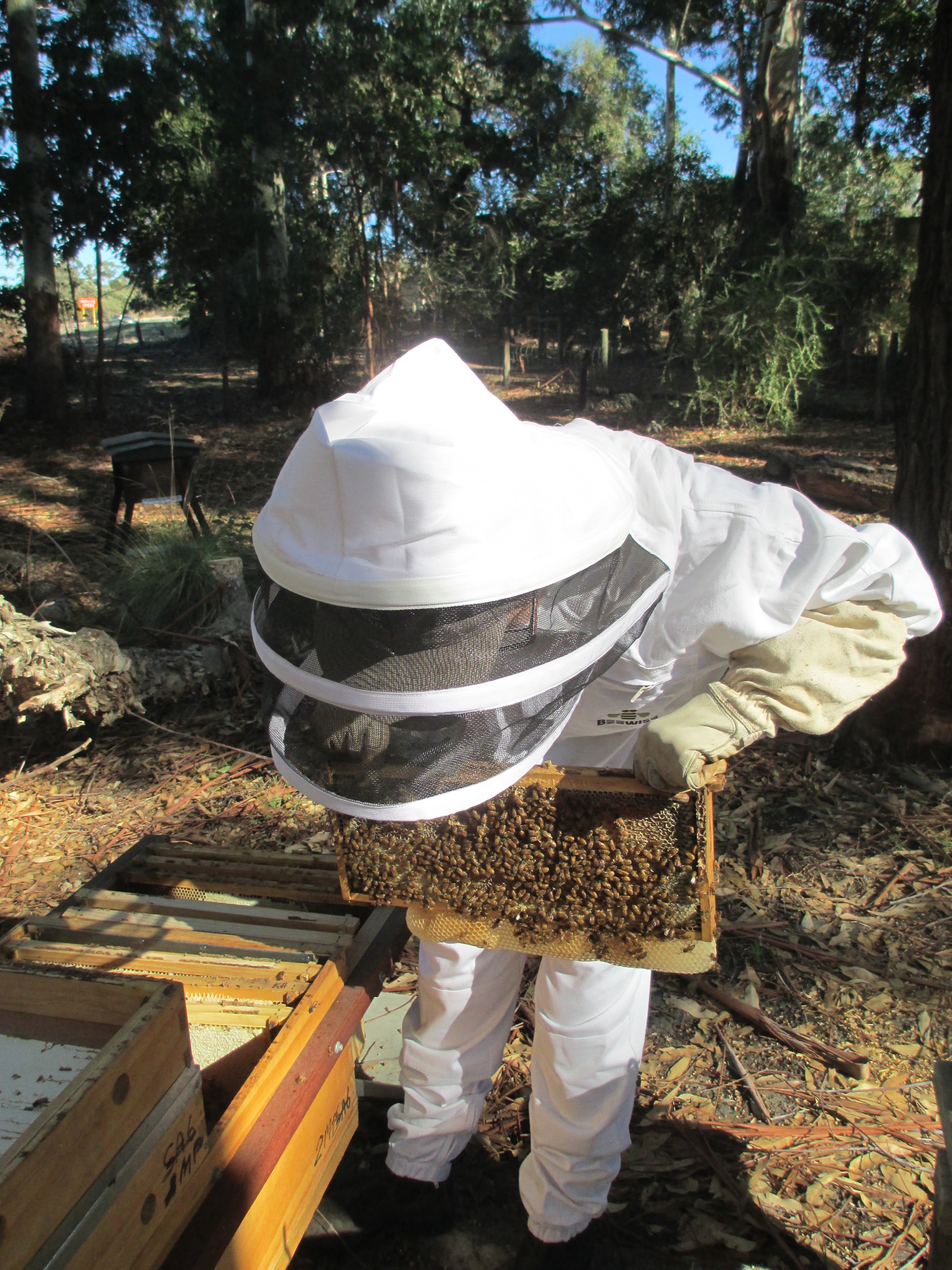 capped honey and comb built below the WSP frame

We also checked the Topbar for winter, removing three frames of drawn comb from one side that were looking quite old and had no activity/honey in them. We then brought the follower board closer in, reducing the overall size of the hive for winter. 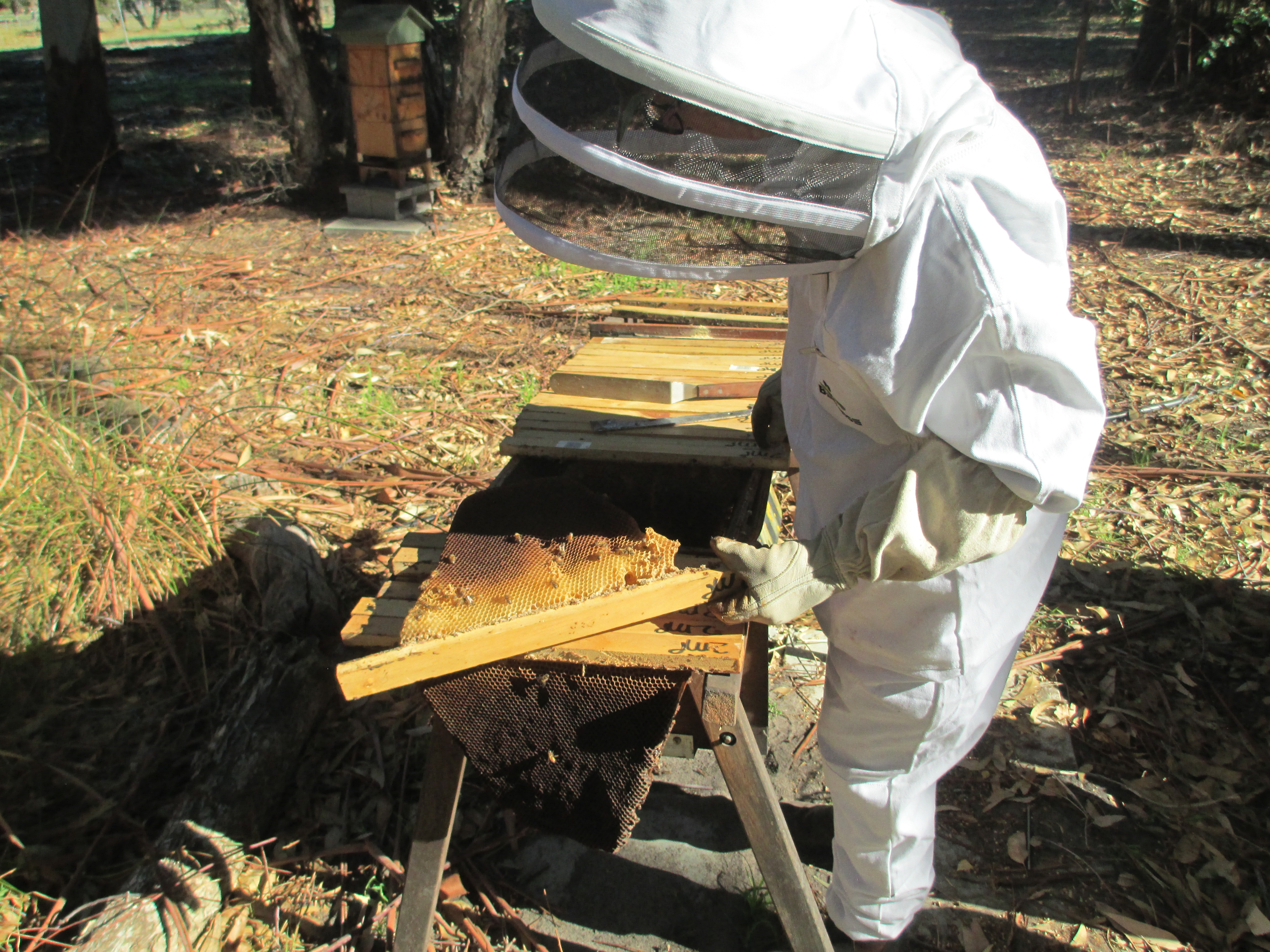 The other side of the Topbar had freshly drawn comb, being filled with honey so we left this side as it was. 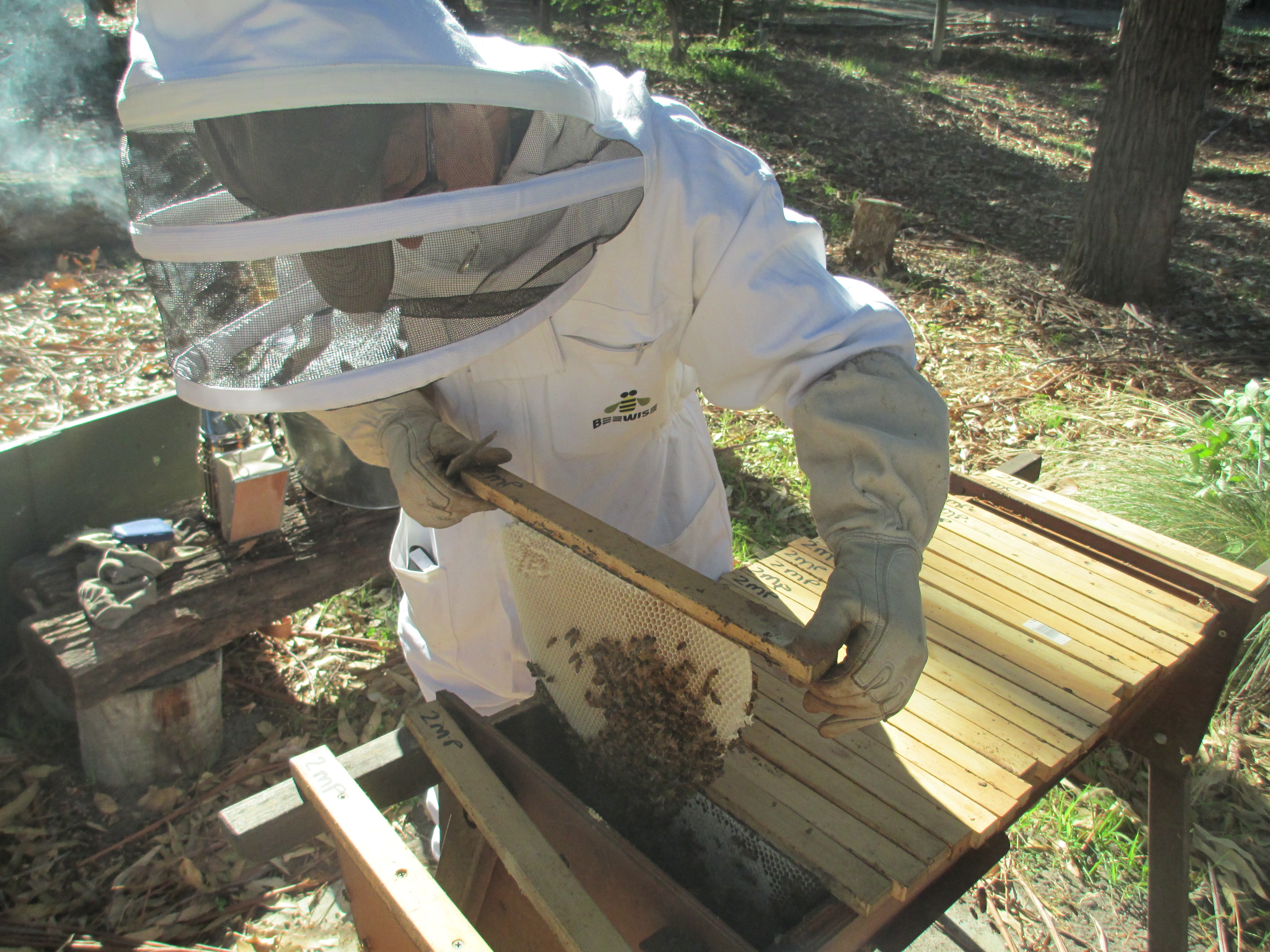 We had a check for brood too, and several frames in saw plenty- capped and uncapped. The bees were becoming agitated so we didn’t continue to find the queen. 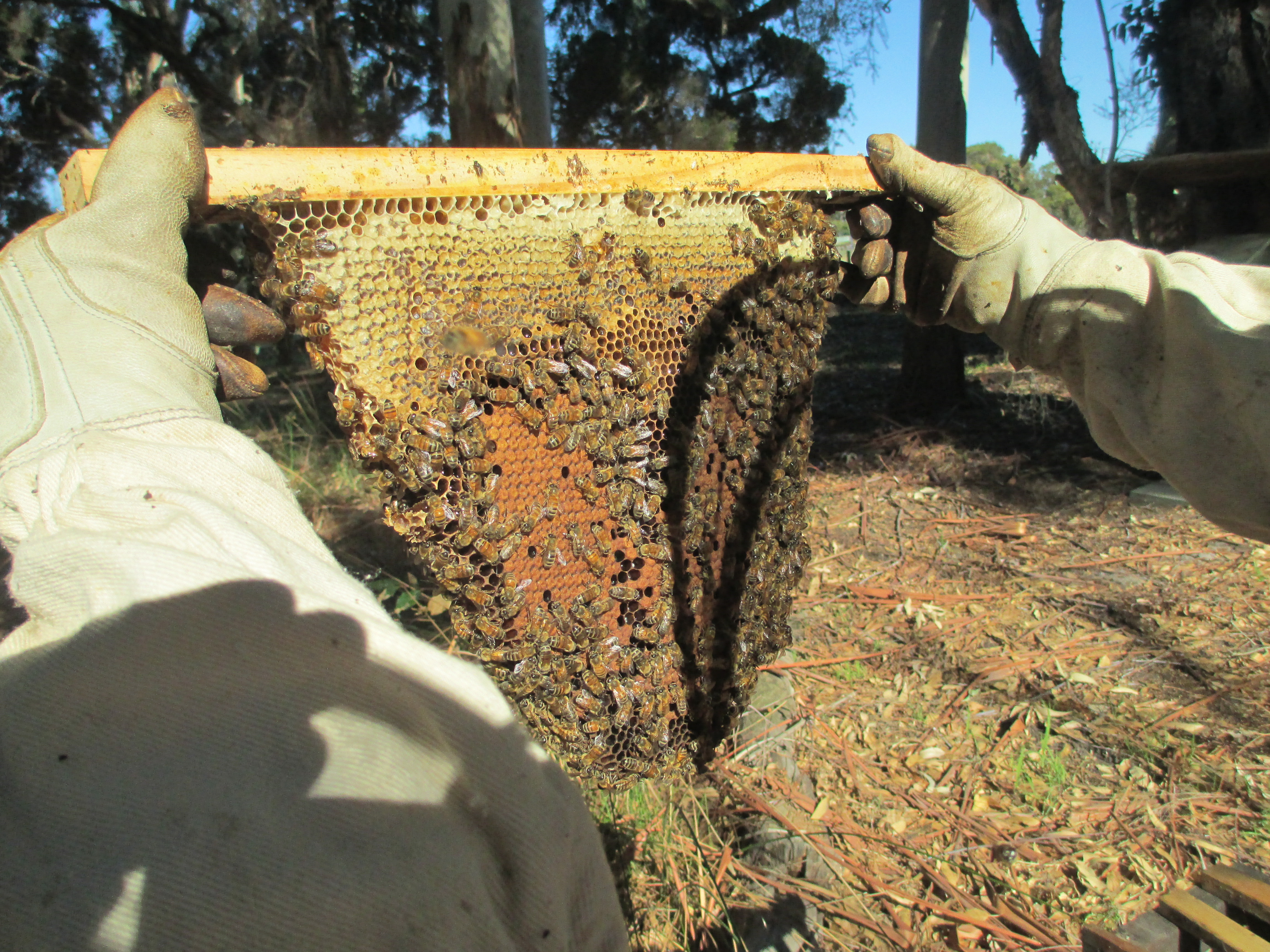 Brood in the topbar

Overall, while we certainly haven’t had a great season and haven’t harvested any honey, we are pleased that the bees seem to be doing ok. This is despite the poor season generally, and the fact that both Horizontals were transferred from Langstroths (and one of these was originally the Topbar that was demolished by a tree). Hopefully they will maintain over winter and be ready to move along in spring.

Our aquaponics system has become more and more acidic over time, and we need to add a small amount of potassium bicarbonate most days to maintain the pH close to 7. We know our bore water (which is all we have, not being on the mains water system) has a pH of 6.4, but also feel the amount of gum leaves that land in the system contribute.

The piles of gum leaves that build up on the ground over the course of the week (between blowing, raking and removing), also provided snake hiding spots (see January), something we were keen to reduce. So, we decided to cover the whole system and aquaculture system in the swimming  pool with a patio roof, built by Great Aussie Patios, who were great from start to finish. Although the area was basically just a very large rectangle, there were many different heights and roof lines to link to and they did a great job. 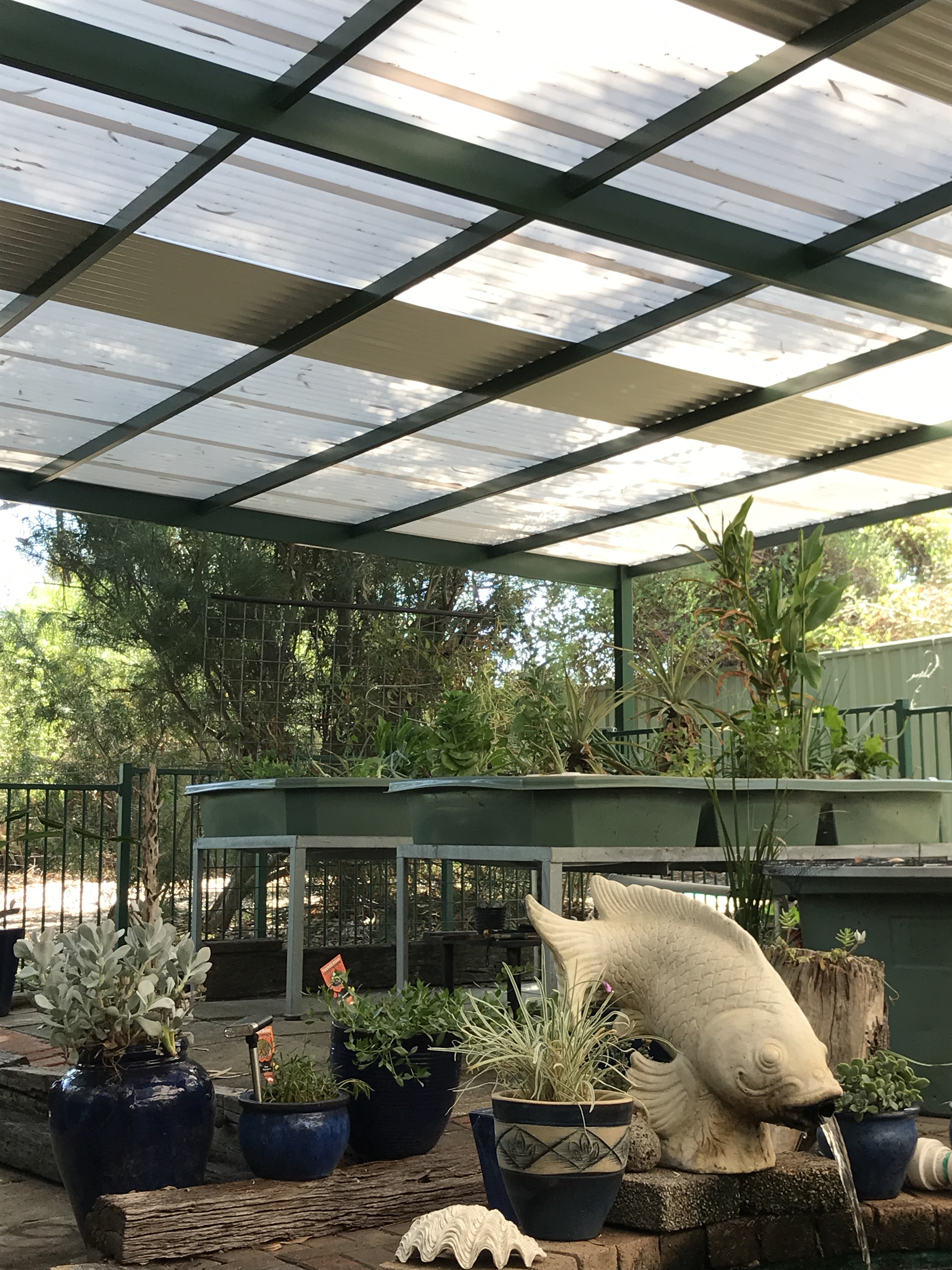 It has been the best thing! We designed the roof to allow plenty of light to the grow beds and pots, but also to provide tin ‘walkways’ for blowing the leaves off. The roof has so successfully reduced the amount of leaves! The pool, grow beds and fish tank have remained clean, as has the ground- reducing our work load enormously. 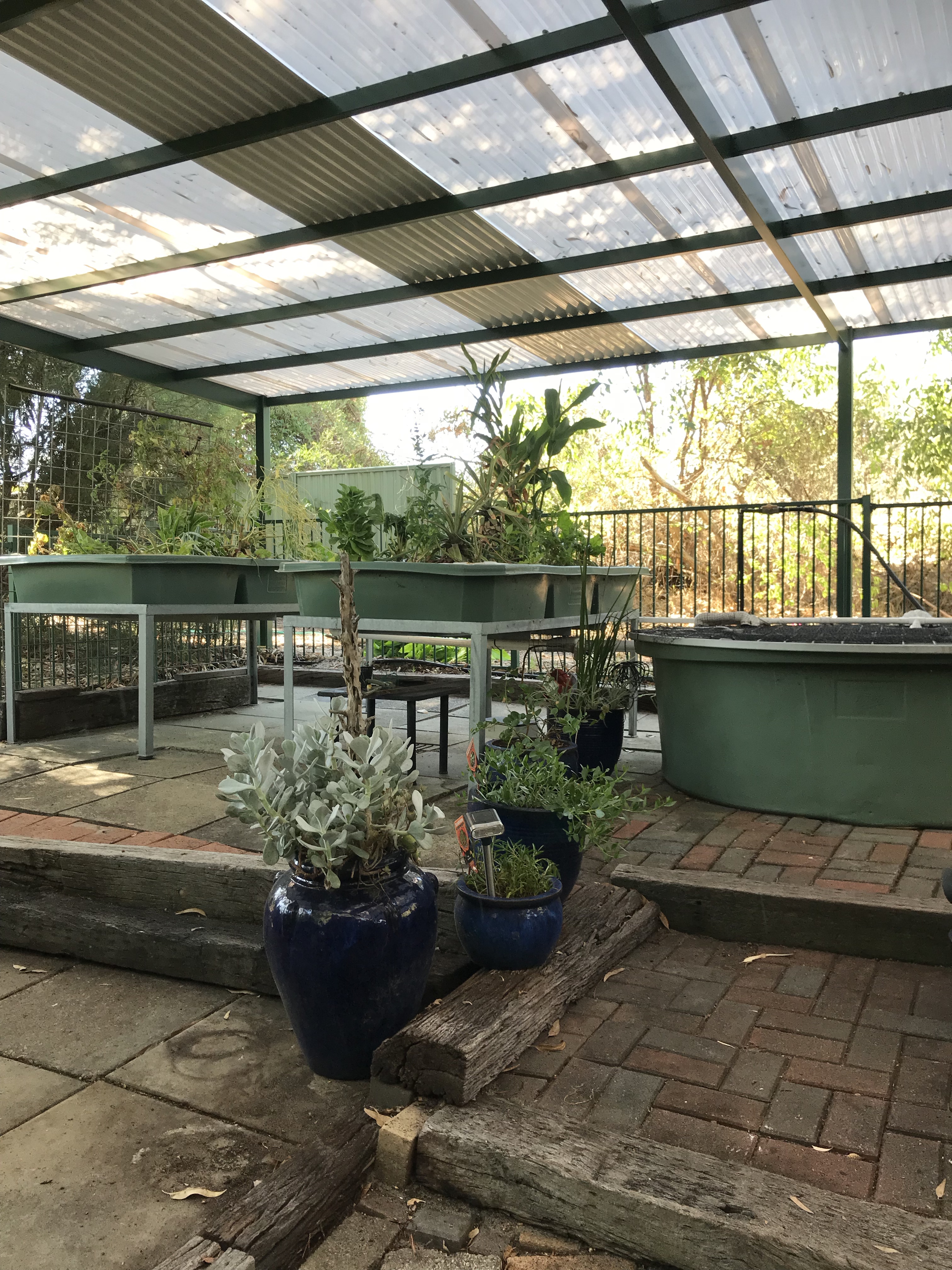 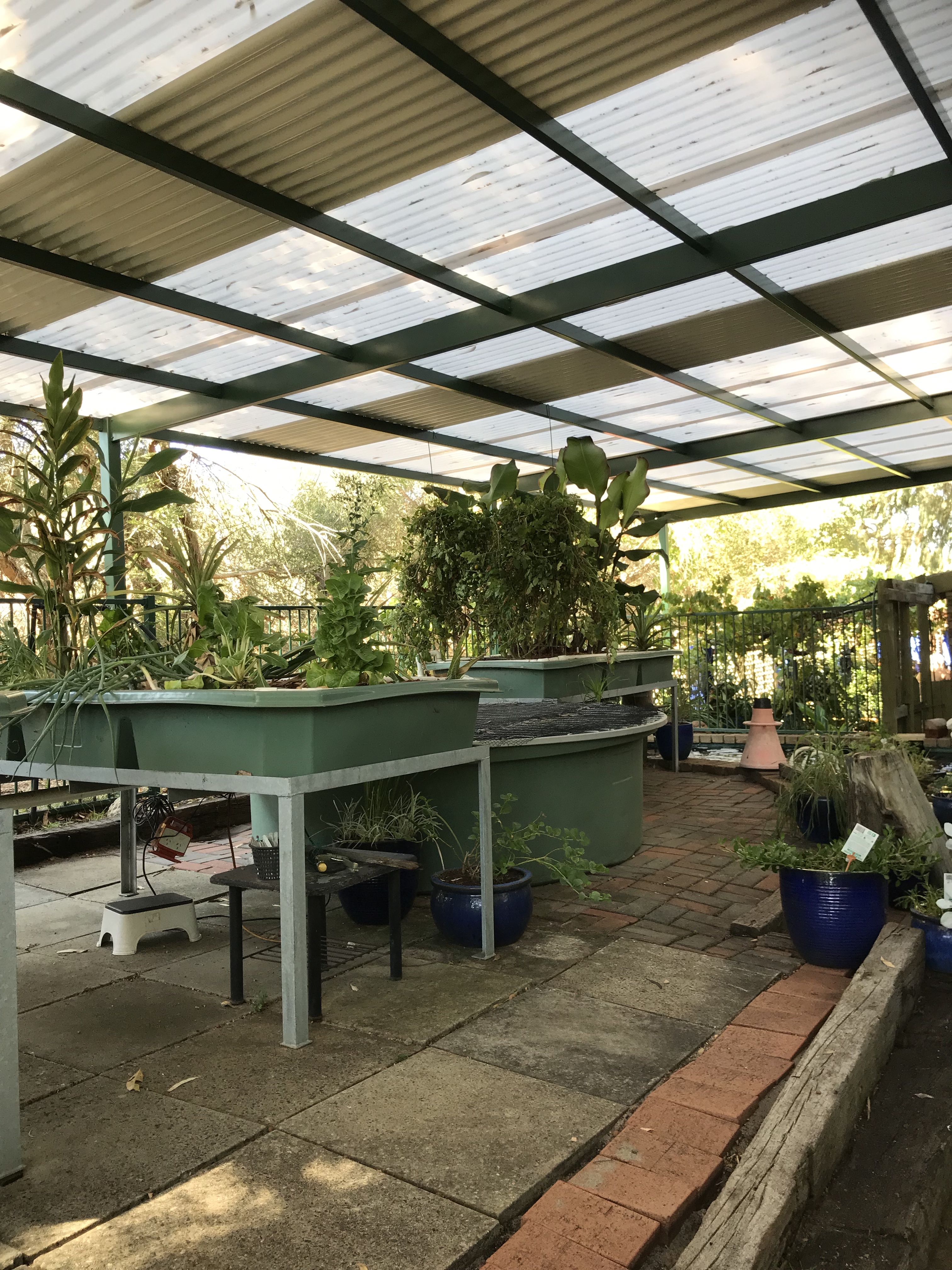 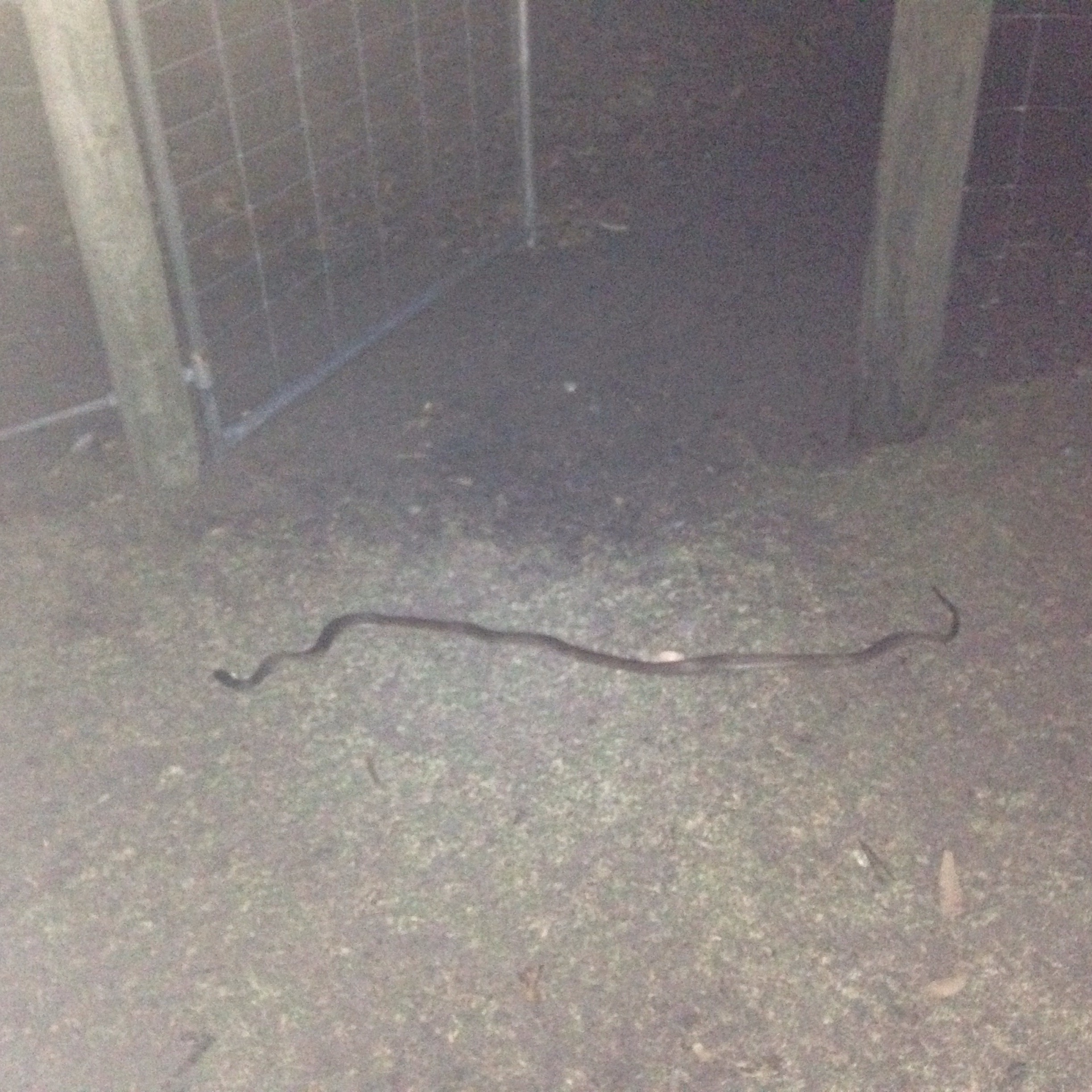 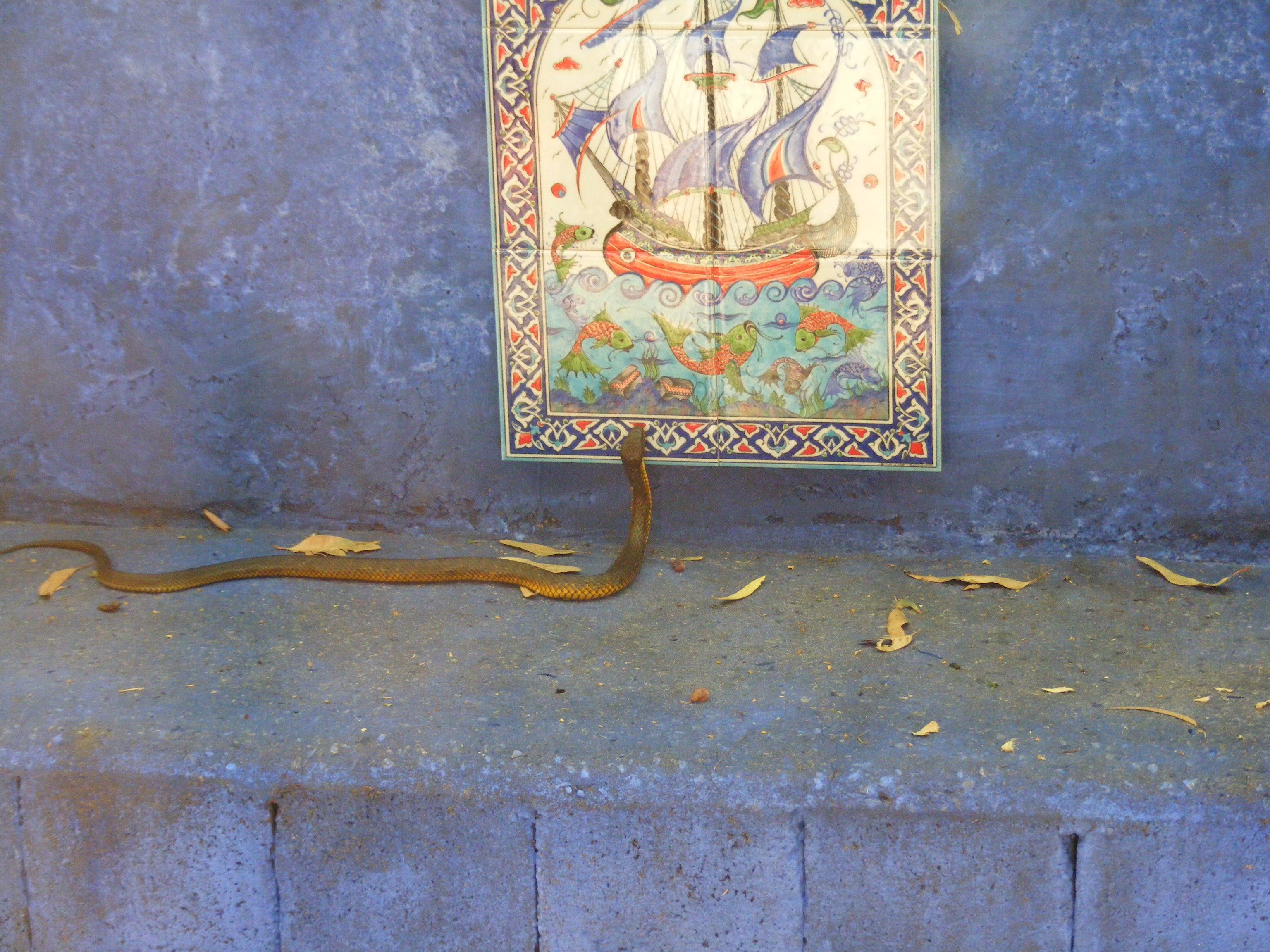