In 2007 we decided that caring for a swimming pool was a waste of time and money for a few minutes cool off on a few days of the year. Gone were the days that the children and their friends would swim for hours….a dip in and out again was quite sufficient for us! So, how to make it more sustainable? Fish of course!! After some research, we realised it could be done….’all’ we need to do was let the chlorine dwindle away, design and fit a bio filter, find a source of edible fish……and hey presto!! we had fish to eat and could still swim in summer when we need to cool off! 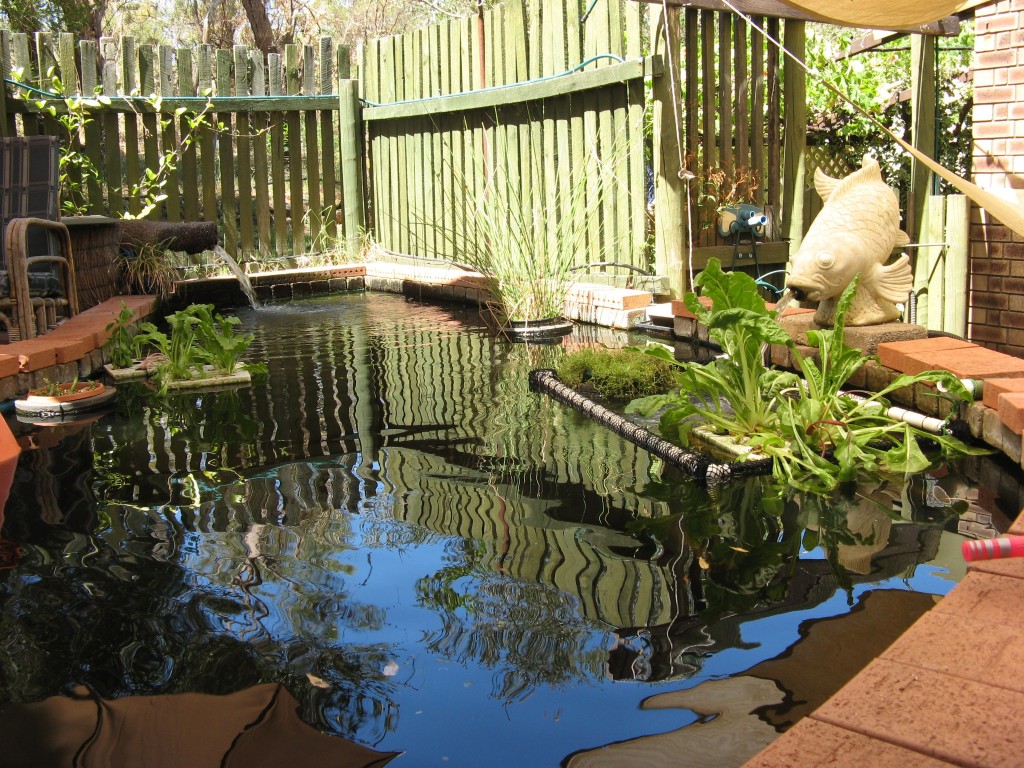 It has been great- not without its challenges, but really worthwhile as it is a much more sustainable use of a swimming pool. Based on some great advice on how to provide adequate aeration, circulation and filtration we bought a 130 watt submersible Ecopump. This is fitted more or less in the centre of the deep part of the pool, and has pipes leading from it to the two ornamental fish (which act as aerators) and the bio filter itself. An added UV Clarifier helps make it safer to swim in, but really it is like swimming in a brackish river. It is cool and refreshing when we need it, but supplies us with fresh fish too!

After some consideration, we decided on barramundi in summer, and trout in winter. The barramundi only survive in warm water and the trout only in cold, so April and October are the change over times. 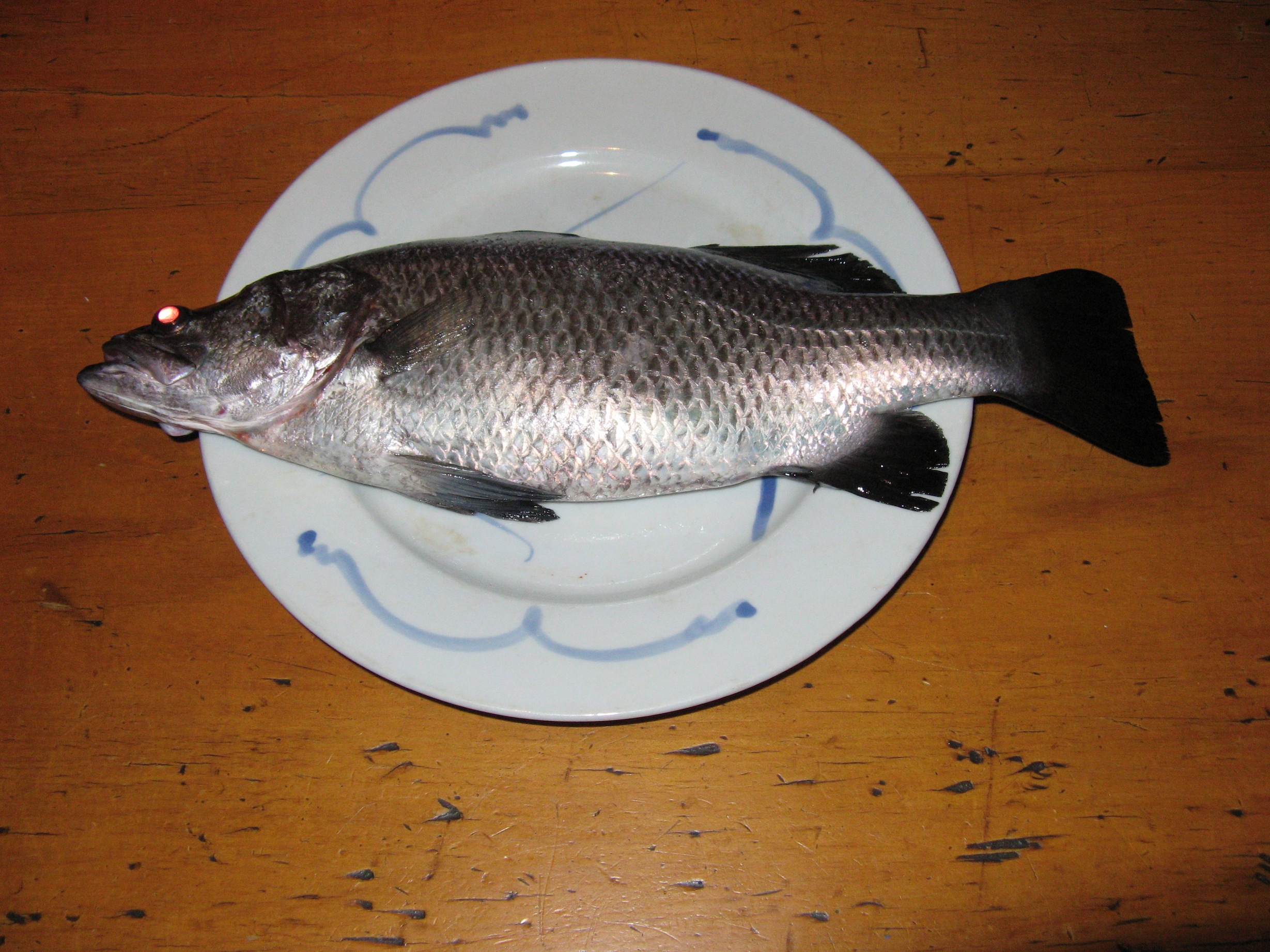 Both have been very successful, though harvesting has had certain challenges! The trout are by far the most entertaining and easiest to grow to a good size. For example this year the trout have grown from fingerlings approximately 15 grams each in early May, to well over 650 grams (one even closer to 800) in early October. 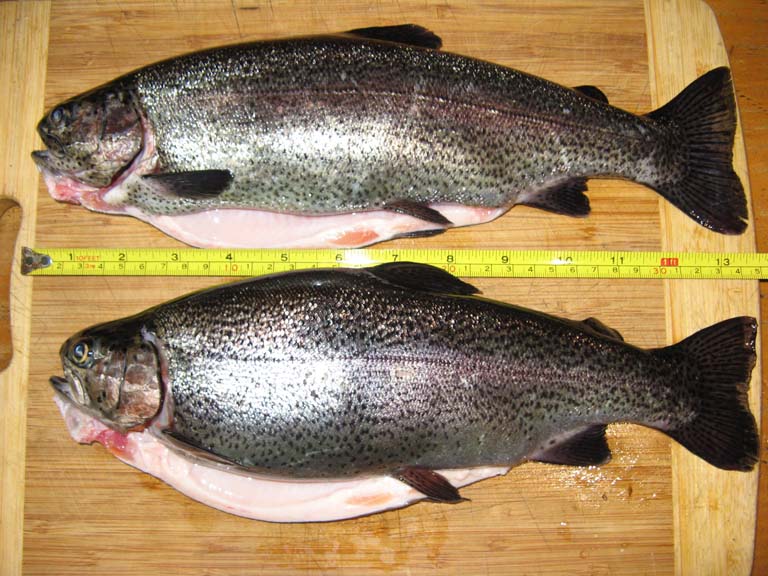 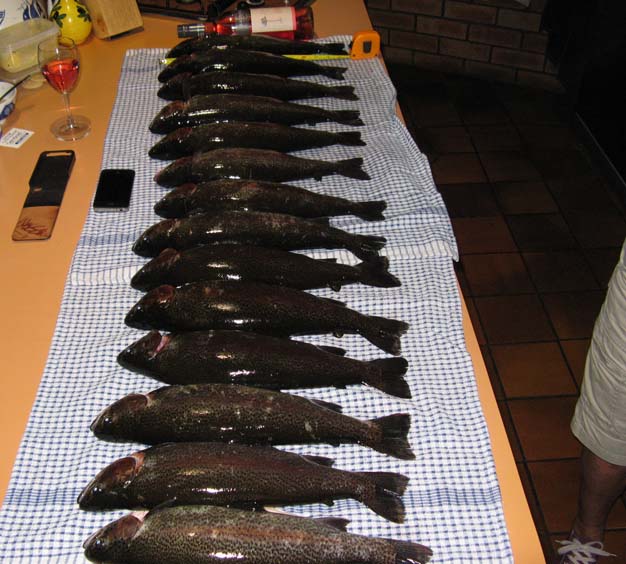 The final trout catch for 2011 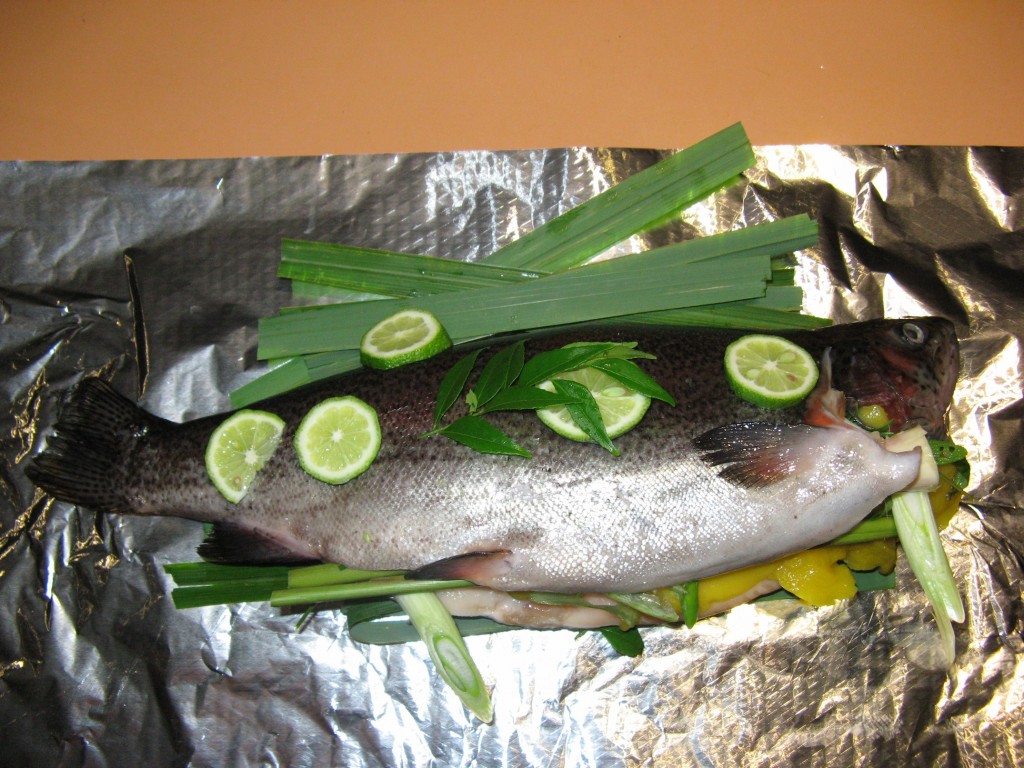 We use a camp oven to smoke the fish…. 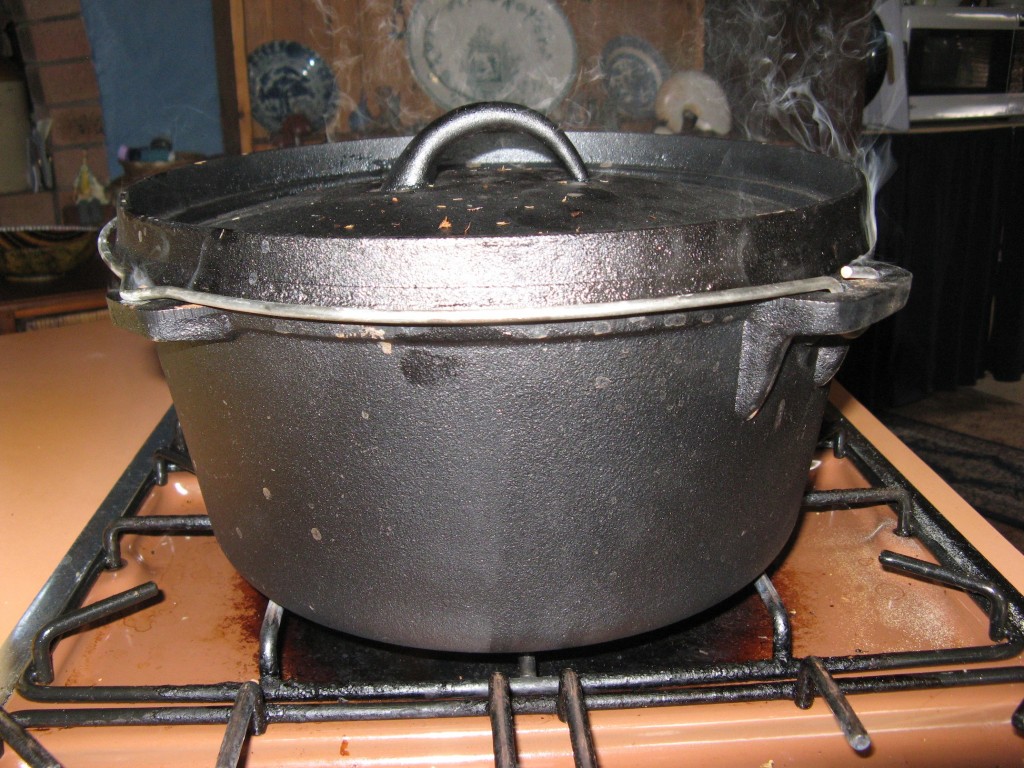 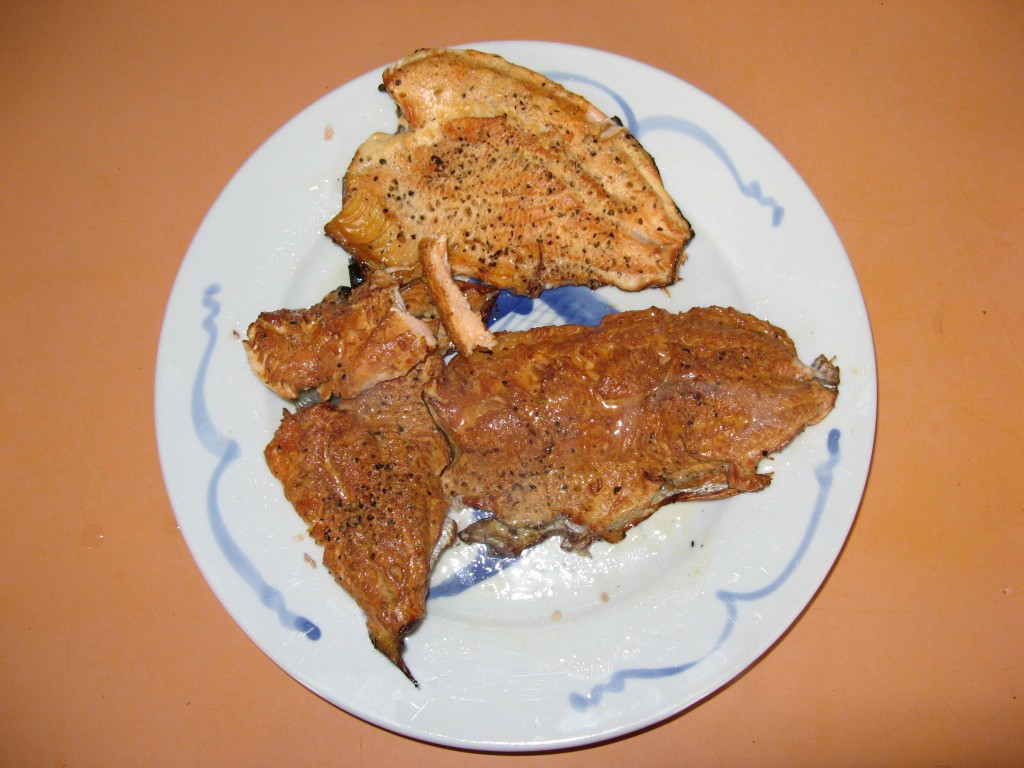 Smoked and ready to eat! 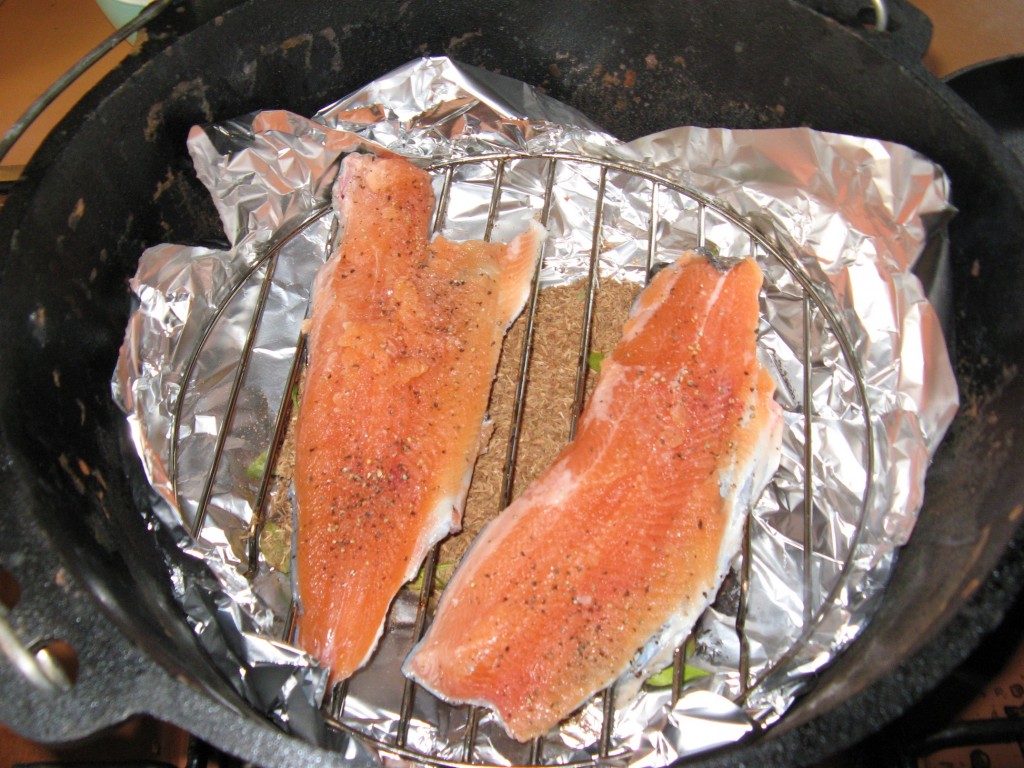 Smoking trout in a camp oven

After this harvest, we decided to try Silver Perch in the swimming pool instead of the Barramundi, as there are numerous advantages-see the perch page! The addition of an aquaponics system though now means we can still enjoy the barramundi in summer and trout in winter, in the smaller more manageable 2000 litre tank!

In addition to the fish, we grow some vegetables in floating pots. Before the perch went in the pool, we experimented a bit to see what will cope with the amount of salt we use for fish health (we generally maintained 5ppt (parts per thousand), and this is too salty for many plants). We had a lot of success with celery and silver beet in particular, but mignonette lettuce, basil, beetroot, and Croatian lettuce have all been successful. Now we have perch, this high salt content is not needed, and in fact is not good for the perch, so we maintain a salt level of 2ppt.